Anybody reading my beer induced posts over the last few months will know that though I’ve lived all over the place, my heart is stuck in Shropshire.
More often than not when I’m over there I drink beers by Salopian or Hobson’s because I love them so much.
But on my last few visits I’ve been finding Stonehouse Brewery of Oswestry, North Shropshire, and enjoying them on tap.
I got in touch with them for a chat and got hold of a few of their bottles to try.

Stonehouse Brewery was set up by Alison and Shane Parr who worked as sales reps in the freight industry prior to setting up the brewery in 2007.
As Alison puts it, “Brewing is far more enjoyable. Shane started home brewing following a brief move from the UK back to Australia (Shane is an Aussie/Kiwi) where he struggled to find good beer.
Once back in the UK he kept brewing because his beer tasted so good. Shane then had the idea that Oswestry needed a brewery and persuaded me to help him set one up.”

As to where they are based, “We brew in an old chicken shed, which is next to the Cambrian railway line in Oswestry, Shropshire,” says Alison, “We have a 18BBL kit and brew three or four times a week. We are currently planning a bigger, better new building (designed for a brewery, not chickens!) so that we can increase our capacity.”

I asked why they bottle condition their beers and was told, “Our bottles are bottle conditioned as we sell primarily to local customers who want the product to resemble our cask product as closely as possible, though we are looking into the option of filtering our bottles in order to send them further afield.”

And plans for the future? Alison again, “We need to expand to meet the growing demand from local customers. We do, however, plan to keep deliveries of the casks local (30-40 miles of Oswestry).
We will continue to strive to make excellent beer that we enjoy drinking!
Maybe one day, we’ll persuade our young children to take over from us, even though they think it would be better to make chocolate…”

As for the beers.
This is my selection from their core range: 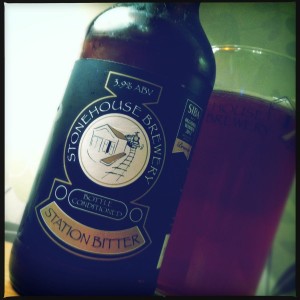 Station Bitter (3.9%)
This beer smells of apples. Bruised, crushed, juicy apples.
It’s packed with rich, unguent, sticky caramels, but even these are coating apples.
Big fat toffee apples.
Right, I’ll stop saying apples now.
This is a pretty decent bitter, lying a deep chestnut brown in the glass and bubbling softly.
You get a reasonable serving of cheesecake biscuit crumb with hints of vanilla and a lick of cinnamon before the hops go all dry and pithy in your tongue.
A big bunch if fresh herbs, a twist of black pepper and a dry citrus finish.
This would make a terrific session ale in your local and has a lovely hit of juicy ripe apples (Oops, there I go again). 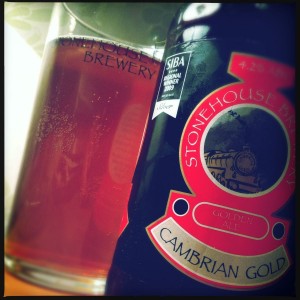 Cambrian Gold (4.2%)
All the others from Stonehouse generally have a decent head and a good fizzy sparkle, so I was concerned as I put this one into a glass.
But despite how it poured there were just enough bubbles in this golden ale to keep me happy.
What truly makes this beer though are the flavours.
A delightful mix of boozy orange marmalade, toffee coated shortbread and fiery pepper completely fills your face.
No, not just your mouth, your whole face glows with the malts.
And that is a very good thing.
As for the hopping, they are dry and crisp and full of elderflowers and raspberries.
Really very good indeed. 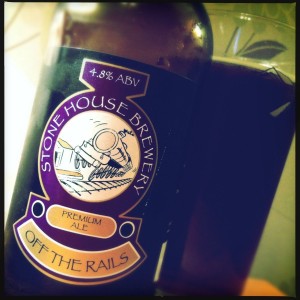 Off The Rails (4.8%)
This is Stonehouse’s Premium Ale and it’s very interesting indeed.
Pouring super dark and with little to no head, the smell is biscuits with hints of raisins.
This beer is full of malt.
Really big and brusque and shouty malt.
Rum and raisin chocolate, sultanas on the side, and crisp bran flake richness that grows as you move down the glass.
Then the hops jump in.
As big and mean as the malts that precede them, the hopping is stinging nettles and peppercorns, rosehip itchiness and spring onion greenery.
I could drink this all evening. 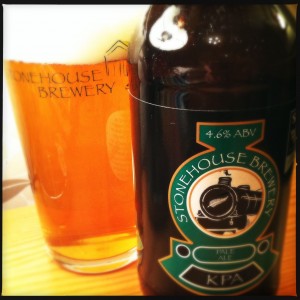 Kingston Flyer KPA (4.6%)
Brewed with New Zealand Bullet hops, this is a wonderfully zippy, zingy little beer.
I poured this it into the glass and smiled at the lovely cloud of a head that sat on top of this orange hued, honeyed ale.
The smell is by turns biscuits, yeast and a background buzz of plump sultanas.
Taking a big gulp I was almost overwhelmed by the big hop hit.
Powerful and aromatic, the hopping is by turns resinous, tangy, astringent, rich, citric, pithy and enormously long.
The body comes from a fun-filled candy apple, sherbet coated caramel malt that fills out this beer and makes it something really rather good.