The Durham Brewery: Innovation With Tradition 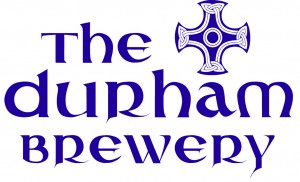 Last week The Durham Brewery organised a successful Twitter event called #whitestout to promote their, um, White Stout.
In getting hold of a bottle so that I could take part, I also saw this as an opportunity to grab a whole bunch of their beers and to have a little chat with them about who they are and what they do.
These are the results.

When did the brewery begin?
Summer 1994.

Have you always been brewers or did you do different jobs before this?
We have all been something else before.
Steve and Christine were peripatetic instrumental teachers who faced redundancy and started the brewery.  Steve was a keen home brewer with a thirst for beer knowledge and Christine found she had a head for business.  Christine also did all the original logo design and artwork.  Eleanor (Elly) is Christine’s daughter and had studied art and design and then accountancy before joining the brewery nearly nine years ago.
Both have been useful, the accountancy for obvious reasons and the art and design when we re-branded last August.
Sean has been with us for six years and had worked in production.
He is extremely well organised and hard working, and has taken to brewing easily.

Where are you brewing and what capacity do you have?
Bowburn, Durham. It’s a 10+ barrel plant.
Four fermenters, so we hace a capacity of forty barrels per week.

Are you filtering your bottled beers or are they bottle conditioned and why?
Nothing is filtered, not even the keg.
Filtration ruins the beer.
All bottles are bottle-conditioned.
We won Gold at 2005 GBBF with Evensong.

What are your plans for the future?
To continue to experiment with new beers and styles, and survive in this ultra competitive environment.
To increase sales to the ‘take home’ market through our fantastic bottle-conditioned range and our 5 litre mini kegs.
Last year we re-branded our bottles to appeal to a wider and possibly younger audience of discerning drinkers.
We are about to start kegging properly. We have started to test this in-house on our bar where we have Magus pale 3.8% bitter and Fallen Angel 5.0% continental lager (real lager, lagered for three months) available in keg permanently.
We also invested in a new website last August and we hope this will drive sales both online and in the trade, and just over a year ago we opened a new visitor centre to make shopping with us a more comfortable experience and it also enables us to operate regular tours on Saturdays.

And so to some of the beers.
I’ve already reviewed the Bombay 106 IPA and the White Stout, so here are some others from Durham’s core range: 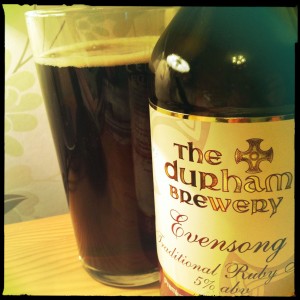 Evensong (5%)
This Traditional Ruby Ale pours into the glass with the most beautiful deep red glow topped with a light foam.
All the Durham beers are bottle conditioned and all of them fizz in a very pleasing way, unlike many other beers that are conditioned in this way.
The smell is Cadbury’s Fruit & Nut chocolate with a splash of Rum & Raisin.
This beer has a very deep biscuity malt. It’s big and round and satisfying, all digestive biscuits dunked in tea with a caramel shortcake for afters.
Topping all this off is a reasonably delicate but still full and satisfying mix of Fuggles and Goldings hops that provide a warm green, slightly spicy and pleasantly aromatic finish. 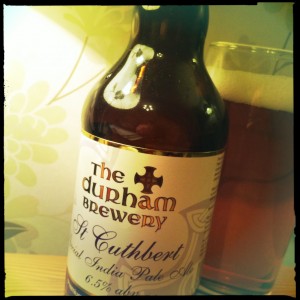 St. Cuthbert Special India Pale Ale (6.5%)
What a super IPA this is.
Crunchy golden syrup biscuit and an enormous smack of toffee apple caramel.
The aroma is fruity and spicy and the fizz and sparkle is just enough to tickle your tongue.
And just to top it off this beer boasts an enormous hop finish.
Red wood richness, dry leaf crunch, a dash of mace and a bouquet of autumn flowers, then a dry blood orange rind lends a hint of American double IPA roundness.
Very more-ish, very satisfying, and very very good. 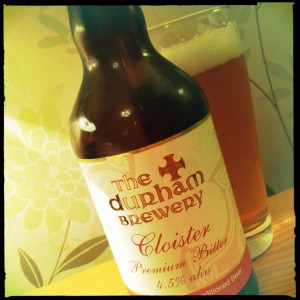 Cloister (4.5%)
A premium bitter that doesn’t disappoint.
During Durham Brewery’s successful #whitestout Twitter event, it was noted by a few people that many of the brewery’s beers all have a hint of Belgian beer in them.
It’s in the smack of the yeast – Big and bold and thoroughly more-some.
It’s in this beer too.
This is a very fine bitter.
Thick treacle toffee malt that sits on the back of your tongue and refuses to leave.
This caramel thickness couples with a very nice hazel nuttiness and coaxes some lovely biscuit flavours out of the brew and provides an excellent stage for the bitter hops to do their work.
And the hops are delightful.
Strong and rippling with muscles, the hops, backed up by yeast bitterness, kick your ass and wink at you as they wander away to find their next target. 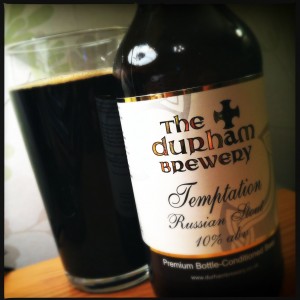 Temptation Russian Stout (10%)
I’m a sucker for a deep, dark, rich and strong as all hell stout, and this one doesn’t disappoint.
Sitting heavy in my glass, this beer is big and black and bold.
It has the merest wisp of head but it twinkles and sparkles enough to tingle on your tongue.
The flavours are intense and complex and, most importantly, ENORMOUS.
Temptation is an amped up beer, even for an Imperial beer.
Full of chocolate steeped in espresso, served with an order of stewed plums and damsons steeped in alcohol (yes, I know I’ve used ‘steeped’ twice. But that’s the best description), you are also given a great big handful of mashed apple cores, black currant leaves and brandy snaps dipped in hot chocolate.
All that description and I’ve only mentioned the malts.
There’s a big fat bunch of hops too.
Loud and brash and dry and fantastic, the hops cut through all the soft, fat liquorice fuelled alcoholic malting with a twist of lemon and a splash of orange juice, providing a long and very very satisfying end to this pint of goodness.