A Brisk Tour Of Leeds

This weekend my eldest daughter had an audition at The Northern School Of Contemporary Dance in Leeds.
I told her I’d meet her up there as she was auditioning in Liverpool the day before and so, at 7pm on Friday night I arrived at Leeds Central Station and walked across town to the eTap Hotel and checked in.
I should have realised while standing in the queue that this wasn’t going to be the best hotel I’d ever stayed in but I’d not got time to pontificate as I needed to be back at the station to meet my daughter off her train.
At ten past eight she came bounding through the station and we headed up to the North Bar for a drink and something to eat. 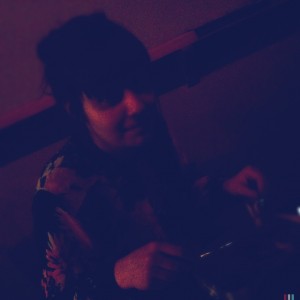 The North Bar is a small and very cool place, and was rammed full with the music (to my old ears) a little too loud. But then I guess it was a Friday night.
We said high to Matt, the Manager, had a brief chat and ordered some food.
While it was being prepared – Pork Pie and mushy peas for me, Pumpkin and Feta Pie for my daugher – I ordered a pint of Magic Rock’s High Wire (5.5%).
Out of a bottle it’s my least favourite of their brews but from cask it’s a completely different beast.
Even my daughter, who had a half, said how almost chewy it was.
(That’s my girl!)
The flavours were fruit cocktail sweets, lime juice and sunshine and very very big.
Needless to say it went down very quickly with our food.
I stood at the bar a while and had a look at everything on offer, and there’s a lot on offer.
One of the terrific bar staff gave me some tasters – Nøgne Ø’s Saison was too floral, Yeti was enormous and brilliantly frightening, and Brooklyn’s Pale was sublime – but I had my eye on Magic Rock’s Magic 8 Ball (7.2%) and ordered a pint.
A pint was too much. 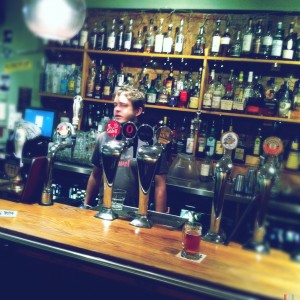 8 Ball is a brilliant drink but it’s really big and hefty and two thirds of the way through it had so completely filled my whole being that I had to leave the rest, so we bade our farewells and went to the hotel.
My daughter and I had rooms next to each other and the next morning I asked how she’d slept.
“I haven’t,” she replied, “How could I with people shouting and singing and banging doors all night.”
And she was right.
Apparently every single stag and hen party in South Yorkshire had checked in to the same hotel as us.
We left early and wandered to Caffe Nero for a coffee and some breakfast before walking through the city to the School Of Contemporary Dance.
I love cities early in the morning.
I used to love walking through London before 8pm when I lived there, and the same when I lived in Pisa.
They are just completely different animals so early in the day.
I dropped my daughter at the school (she was to travel home with a friend) and went back into town. 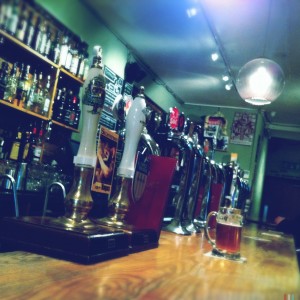 After more coffee I popped back in to the North Bar where it was quite and empty, and grabbed a half of Ilkley Brewery’s MJ Summit (5.4%).
Summit is a brilliantly English IPA, bursting with green misty countryside flavours, I wished it was later than eleven in the morning so that I could have a pint.
Instead I ordered half a pint of Kirkstall’s Three Swords (4.6%), a lovely light pale ale with a crisp finish.
I’ve just read all that back and it appears I simply sat at the bar drinking.
In fact I had a good chat with Matt and with Glynn Davies – Business, Retail, Food and Beer Writer – who had wandered in with a couple of friends.
We talked beer and CAMRGB and CAMRA and beer and at midday I left happy and glowing, and wandered down the road to Mr. Foley’s where the beer of the weekend was waiting for me.
Mr. Foley’s is a big pub with a small bar.
But that small bar hosts a wonderful array of beer. 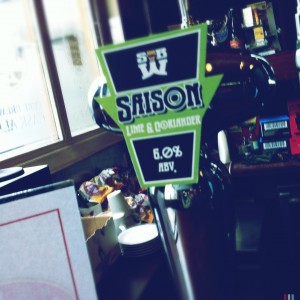 My eye fixed on Summer Wine Brewery’s Saison (6%) and I ordered a half.
Wow, this is a wonderful beer.
I’m not sure how much of it you could drink as the flavours may become too overpowering, but the lime and coriander riding on the shoulders of the Belgian flavours of this beer were clean and zippy and absolutely stunning.
After running a quick errand, I made my way to the station and hopped onto an earlier train than the one I’d booked as it suddenly occurred to me that I could nip into the Sheffield Tap while waiting for my connection home.
The Tap was buzzing with people, it’s a bright and airy place adorned wall to ceiling with Thornbridge logos (hardly surprising really) and with some really good choices on the bar. 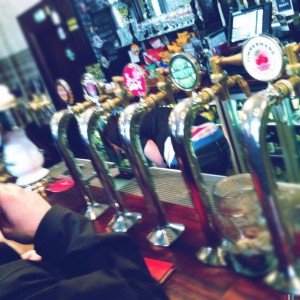 I plumped for a half of Rogue Ales’s Dead Guy (6.6%) which was maple syrup thick and densely packed with pine needle sharpness and  rounded dry leafy redwood hops.
Then I picked up a couple of bottles to take home and caught the train.
On the way back I got a message from my daughter – She’d not made the cut.
All of a sudden I wished I’d been able to stay up there with her.
She was OK though and as her friend hadn’t made it either they had each other to share their disappointment with.
It was the briefest of visits really, but with so much Really Good Beer on offer, and so many good places to drink it, not to mention friendly people to share with, Leeds (and Sheffield Station) are brilliant places to be. 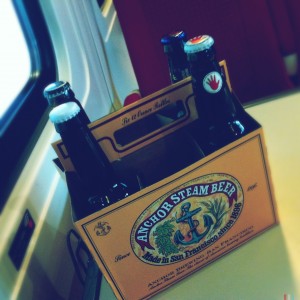 Thanks to all at The North Bar, Mr. Foley’s and The Sheffield Tap for being so welcoming.
No thanks at all to eTap Leeds for being a terrible place to stay.

One Response to A Brisk Tour Of Leeds