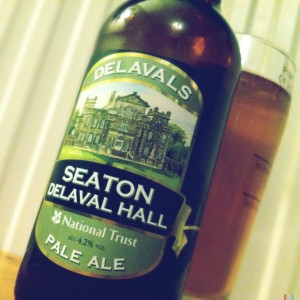 This is a very more-ish pale ale.
There’s nothing here to make you gasp with pleasure, but plenty to make you sigh with satisfaction.
Pouring a delightfully clear, bright amber, the aroma is spice infused fruits.
The first thing in your mouth is simple, you are taken aback by just how zippy this beer feels even though it pours so uninspiringly into your glass.
The malt is so subtle it’s almost hard to pick out exactly what it’s doing, but there’s just enough honey rich digestive biscuit to form the backbone of the beer.
Over this the hops give fleeting glimpses of elderflower and blackberry leaves, along with a dry popping peppercorn spike that really lasts.
This is really rather good.