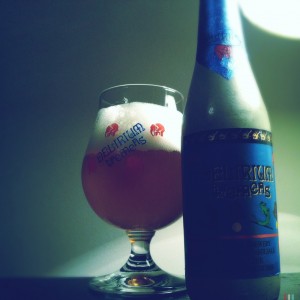 Yes, you’ve all had Tremens.
I’ve had it before too, I’ve just not written about it.
The last time I had it was in a pub after a few pints and I drank it thinking I must write about this.
But I was slightly more, um, full of beer than perhaps I should have been and instead of making notes I made slurred conversation.
But there might be two people in the world who’ve not tried this, and so this is for them.

This is possibly the most fizz-filled, heady, bubbling beer in the world, its dense cloud of head like the place that Jack finds the giant has built his castle.
I’m looking at it now, five minutes after pouring it and it still looks immensely angry, growling like a beery volcano.
What a superb little bottle of magic beans this is.
Fiercely fruity and dripping with caramel, this is a Belgian brewed beer that simply screams its Nationality at you.
It grabs your cheeks and pulls them, grinning like a madman as it laughs in your face while its yeast fuelled bitter sweet golden honeyed beauty walks right up to you, proud in its nakedness, absolutely sure of itself as it shows you its tackle and leaves you with a gaspingly gorgeous dry lemon rind finish.
Delirium make ridiculously brilliant and simply ridiculous beer.