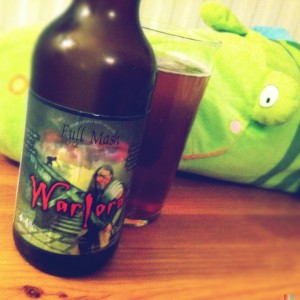 I made my thoughts about this brewery’s labels clear in my last review, so I won’t go there again.
Unlike the last beer of theirs I tried, this one is wholly unremarkable.
There’s nothing wrong per se, but there’s nothing to make you remember it fondly or think you must have it again.
Sticking my nose in the glass gives me a slightly yeasty, fruity aroma.
But it’s vague.
It’s almost like smelling a beer from a different room.
The beer’s fizzy and retains a bit of creamy head right down the glass, it has some malt flavours that give biscuit and cereal tones and it has some hops that leave a slightly floral bitterness.
The bottle tells us that the beer “contains live brewers yeast,” and it does.
What it doesn’t contain is anything more than unmemorable, unremarkable beer.
This isn’t a very positive review and I imagine some people might have a problem with that.
That’s the nature of people.
Oh, and watch out for the crocodile.