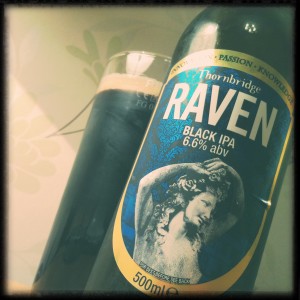 Of all the black IPAs that have appeared over the last eighteen months or so, this is one of the best.
I’ve grown a little tired of Thornbridge recently, and have found a couple of their core beers that I used to love have become sweet and sickly.
Initially I would say that this is to do with my taste changing, but drinking this beer I think it’s more to do with several of the Thornbridge beers changing in an attempt to win the hearts of ordinary beer drinkers.
Does that make me sound like a pretentious beer arse?
So be it.
Raven is a brilliant beer.
It pours deep and dense with a light head that’s cappuccino coloured and cappuccino thick.
There flavours are dark bitter chocolate cut through with prunes and plums, perfectly stewed but then doused in penny sweet sherbet.
Eye wateringly bitter, you also get coffee and pithy green sapling wood, before the finish that’s dry and heavily hopped, bitter and long.
It’s raspberry leaf snap and black pepper infused crushed herbs and flowerbeds.
Raven is a great Black IPA and now it’s available in Waitrose it becomes a little bit more special because it now has the potential to turn more beer drinkers into beer geeks.
Cheers.