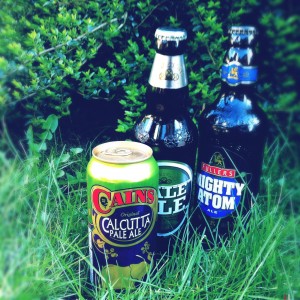 A couple of weeks ago Danny of Mediocre Beer Adventures asked if I’d be interested in taking part in a collaborative beer review.
It sounded like a good idea to me and, because we were discussing it in the world of Twitter Richard from Porter Pages said he’d like to join in too.
It didn’t take long for one of us, and I think it was Danny (he’s the brains behind all this) to come up with the idea of the three of us reviewing three beers all brewed at under 3%.
Personally I really liked that idea as only last year the ridiculous changes to beer taxation meant that beers brewed at 2.8% and under are completely tax free whereas anything over 7.5% had a hefty tax hike (which, as you may or may not know, CAMRGB helped campaign against in October 2011).

A quick look around local supermarkets gave us three likely candidates, Fuller’s Mighty Atom (2.8%), Cain’s Calcutta Pale Ale (2.8%), and Marstons Pale Ale (2.8%).
We each bought our beers and settled down to review them. 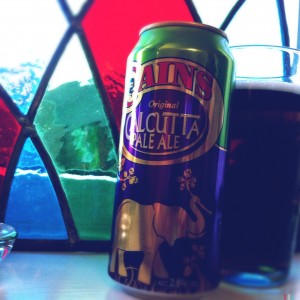 Cain’s Calcutta Pale Ale (2.85)
Simon:
Decent copper colour, but that’s about where it ends as it lacks anything resembling memorable or moreish.
There’s the merest hint of caramel and a tiny (and I mean tiny) flash of hops.
But everything disappears almost as soon as it arrives.
It may as well not be there at all.

Richard:
Amber with a poorly retained off-white head, and nothing but a sweet, cardboardy malt.
Sweet nutty vanilla malt.
Hop presence is practically nil, and there’s little in the way of a finish save for some extremely mild bitterness.

Danny:
Pours the colour of a creosoted fence, sorry a fence treated with wood preserver (following the outlawing of creosote).
Smells like plastic sheeting.
Taste is almost non-existent.
How they can attribute any ‘Indian’ characteristics to this, is almost mind boggling.
Hops? What hops?
Thin in the gob, with a mere dusting of furniture for faint flavoured finish. 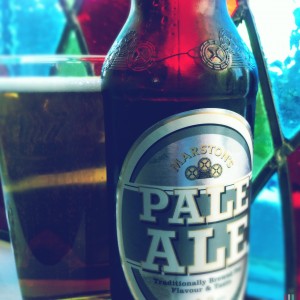 Marstons Pale Ale (2.8%)
Simon:
Well it pours like beer and it looks like beer so it’s beer right?
Not really, no.
The aroma is a beer you drank yesterday and the flavour is predominantly water.
I mean, it’s nice water as it goes, but that’s about it.
A waft of malt and I can just about taste some, oh, actually, no I can’t, it was a memory of a beer I had last week.
Oh hang on, I’m finally getting something.
It’s a distinctly nasty and quietly chemical flavour and it’s really unpleasent.

Richard:
This beer is as amber as it gets with fast disappearing off-white head and there’s a malty, apple, grassy aroma.
Very light hop. Weak, with some biscuity, sugary malt but fairly indistinct.
Melon and a vague bitterness in the finish.
Medium body and well carbonated which is probably the beer’s best aspects.

Danny:
Gold, with a scum top.
Smells like burnt fingernail.
Taste is mostly a bit of sour malt, but not strongly flavoured.
Finish is both a bit malty and a bit ‘off’, with some plastic.
Not really very good, is it?
But better than Cains Calcutta. 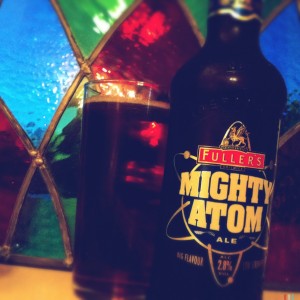 Fuller’s Might Atom (2.8%)
Simon:
How interesting.
Not only does this not resemble the other two but it actually has a discernible flavour.
There’s a pleasant though ultra light blink-and-you’ll-miss-it citrus bite.
It’s right at the front and it’s quite a surprise.
Dare I say I detect a smattering of malty biscuit crumbs too?

Richard:
Copper with fast-disappearing off-white head.
Unique hop-oriented nose, vegetal and Parma Violet-like.
Sappy floral/sherbert/piney hop aroma up front (a little citrus), quite dry and bitter in a longish finish.  A little metallic in the finish too.
Well balanced, and Fuller’s have gone all ‘modern’ and put at least one US hop variety in this – A smart move!
Perhaps a little lighter than Marstons Pale and similarly well carbonated.

Danny:
Yellow, no head.
Smells like the anceint Egypt exhibition at New Walk Museum, Leicester.
Compared to the other two beers sampled this evening, this is marvellous.
Weak? Yes.
Lots of water? Yes, but also a very fresh hop note towards the finish.
Flavoured with some of the better UK hop varieties.
As a stand alone beer it’s pleasant.
In comparison with Marstons Pale Ale and Cains Calcutta, it’s on a par with the Pharos of Alexandria.

So there you have it.
Three bloggers, three beers under 3% ABV.
I’ll leave it to Danny to sum up.

What have I learned?
Flavour comes from ABV.
But then I think I already knew that.
The Marstons is utterly pointless.
The Fullers could fill a niche in the UK drinking scene, with some careful branding and pricing.
The Cains is a shower.
As stated on Twitter, there must be dozens of UK beer drinkers wondering what to do with the other three cans from their Cains’ four pack.