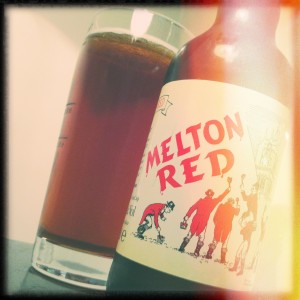 Never judge a book by its cover.
I keep seeing this in local shops, including Tescos, and ignoring it because I find the label a bit rubbish.
Silly me.
I’ve been missing out as this is a really good best bitter.
It pours a super chestnut brown and smells of raisins and biscuits and fruit.
There’s a really good rum and raisin chocolate bar going on right form the first mouthful too, and this gives way to the kind of biscuit you just have to dunk.
It’s the brown leafy flavours that really grabbed me though.
You’re taken deep into autumnal English woodland, orange red brown leaves crunch under foot, spiky cased chestnuts get kicked, everything smells and tastes wonderfully fresh and dry yet there’s a dark dense moistness.
Yes, this is a really good beer and Ive been missing out all this time.
I won’t judge a book by its cover again.