Those of you who visit this site regularly will already know that I think Brewers & Union make some splendid lagered beers.
They also have terrific packaging and a very cool logo which I’m also a bit of a geek about.
It turns out there are three of their beers that I’d not yet tried and so I thought it was about time I got hold of them, drank them and had a little chat with the brewery.
Founded by Rui Esteves and Brad Armitage, & Union was initially bar based under a church.
They then started brewing in Belgium in 2007 and now brew in both Belgium and Germany, and are soon to start brewing in the UK.
I asked Rui if he’d always been a brewer and his reply was, “We were in the coffee business before. Not so different really. They are both very stimulating beverages,” which says a lot about the way he and his partner think about their business and certainly fits in with the Union in their name, with a collective of brewers all brewing under one banner as and when called upon.
There core range coes in filtered 330ml bottles and unfiltered 500ml bottles, and with their weissbier bottle conditioned as, “it adds a certain complexity.”
I was going to talk to them more about the business and their plans for the future but then I read a piece on them and found a quote about their bar that I think sums them up as a business and a brewer, and that I at least find very cool indeed,

The Brewers & Union marketing strategy is simple – pour every ounce of energy and passion into creating a remarkably elegant beer salon that you’ll find every excuse under the sun to visit whenever you can…and be patient.

And so, here’s what I thought of the beers I’d not previously tried. 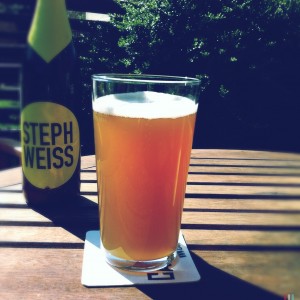 Steph Weiss (5%)
I think I’ve finally found a weissbier that I really like.
This beer pours thick and cloudy and looks like tropical fruit juice in my glass, and the aroma is round and fruity with a hint of aniseed and all spice.
On taking a mouthful, the beer coats the inside of your face with thick, sticky fruit pulp goodness.
there’s a big blast of bananas pan fried in caramel, there’s brown sugar and there’s a terrific squeeze of lime juice that really lifts this beer as it cuts through the stickiness and provides a deliciously sharp acidic tang that helps clear your palate.
Towards the end you get a distinct wash of vanilla pod richness before a slightly steely metallic finish.
I still wouldn’t drink this style of beer regularly, but sitting here in the sun with a spicy chorizo and chickpea soup and some yummy fresh crusty bread Steph Weiss doesn’t just taste right, it makes absolute sense. 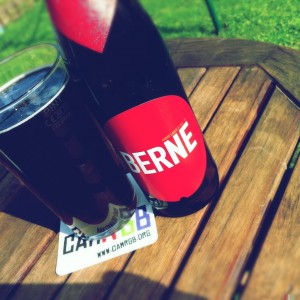 Berne (5%)
This is Brewers & Union’s amber lager and it pours the colour of a decent pint of bitter.
Berne isn’t a lager for the feint hearted, as the flavours are big and brash and a bit bullish.
The smell is peppery caramel and earthy flowerbeds, sweet, spiky and floral.
You get a very big hit of biscuit in the malt and a lovely bunch of fresh herby leaves on top.
But after these initial bursts of flavour have died down you’re left with a rather elegant lager, fruit rich but still snappy and light enough to refresh.
And then, right at the end, there’s a big smack of raspberry leaves and all spice that lingers in a really lovely way.
This beer is another example of why you should never write off lagered beer. 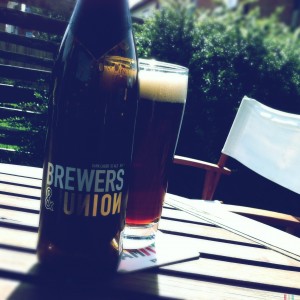 Dark Lager (5%)
Another unfiltered and very well made beer.
In the sunlight this beer has the colour of black cherries and has a calico coloured foamy head.
The aroma is slightly metallic with a hit of bready yeast, not overly enticing perhaps, but the first mouthful makes you glad you ignored the smell.
This is a lagered beer with pretentions of being a porter as toasted dark malts mix with liquorice, bruised apples and marmite, along with the flavours you’d normally associate with a lagered beer.
Green stems and elderflowers, peppercorns, a little bit of honey right at the back and a gently dry finish.
Probably my least favourite from Brewers & Union, but still very good indeed.