Greene King Do The Wrong Thing

A few weeks ago Greene King announced they were rebranding their megalithic flagship IPA and introducing two new beers.
They whisked some beer writers off for a posh dinner and some tasting and they very kindly sent one or two others some bottles for review.
I now think inviting various beer writers around the brewery, myself included, was all part of the build up to this, which I guess is fair enough from a marketing and publicity point of view.
However, I do agree entirely with Boak & Bailey that Greene King may have been better advised to take a group of writers around together instead of luring them in one at a time.
Last night I opened the first of the two new brews which is called IPA Gold (there’s a review below) and reading the label, looking at the bottle and watching what will become the new advert for Greene King IPA on YouTube, I came to the sad conclusion that no matter what is asked of writers, bloggers and drinkers, Greene King just carry on regardless and as a result have missed the mark by a long chalk.
Firstly, as I pointed out to them during my visit, their IPA is a bad beer, insipid, tastless and brewed to market forces. They can argue all they like that it’s the best selling ale in the UK but you can do wonderful things with heavy marketing (the beer of the Rugby World Cup for example) as I found when running record labels and trying to sell my artists’ albums. Expensive promotion through sponsorship goes a long way, as does big discount deals through supermarkets.
I don’t blame Greene King in any way for any of this, they’re a huge business, but I do think that in the light of this remarketing their IPA with the title “Handcrafted” is totally missing the point of how to grab the craft end of the marketplace.
I can’t imagine anybody that I know being taken in by this.
And then there’s the bottles.
The new beers still come in clear bottles, another sign that the marketers at GK haven’t listened to anything that they’ve been told by the people they’ve been talking to or the blogs and articles they’ve been reading.
Even if you’re going to attack this from a marketing point of view, beer seen through clear glass might look nice on the shelves but it sends out entirely the wrong signals to the new area of beer drinkers whose money you’re trying to grab.
(In fact it’s made me wonder if CAMRGB should perhaps start a campaign against clear bottles).
It strikes me that Greene King are acting like beer’s big deaf and stubborn old uncle.
They definitely are interested in what people have to say, but they can’t quite take in that they might be doing something wrong.
And to rub salt into the wounds, as well as sending a bottle each of the new beers, I was sent a Greene King IPA in a Smoothflow can.
Let’s just say I won’t bother reviewing that one. 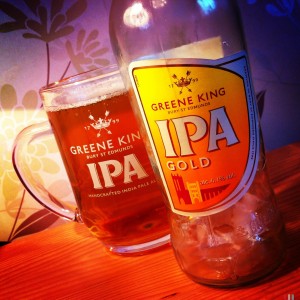 IPA Gold (4.1%)
Oh dear.
Immediately there’s that Greene King taste that so many of us don’t like.
And unfortunately that’s about all there is here.
I don’t understand, I really don’t.
Greene King have a good brewer and a fantastic brewery but they seem driven by using as few ingredients as possible.
The tasting notes on the bottle talks of the Savinsjki Golding hop variety used but there’s almost no hop presence here at all.
An India Pale Ale, as this and their flagship brew is meant to be, should be hop heavy but this has no balls at all.
Sadly too, there’s already the beginnings of that ashtray taste that I have come to associate with light strike from clear bottles.
If you concentrate really hard there is the merest, and I mean merest hint of something citrusy, but that’s really your lot and I’m afraid that having been to Greene King and taken part in their quality control taste testing and having got some pretty decent marks doing so I can safely say most of the above is reasonably accurate.
I’m not so much disappointed as sadly unsurprised. 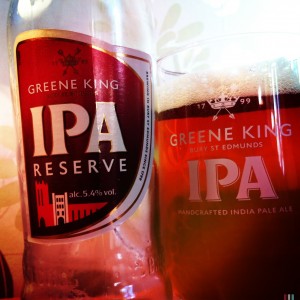 IPA Reserve (5.4%)
If I was a more cynical man than I am I’d say this tastes remarkably like Old Speckled Hen hidden in a different bottle.
It has that same aroma tinged with cleaning fluid and a hint of vomit.
It’s the same chestnut brown colour and has the same foamy head.
And taking a drink, there’s that same old Greene King flavour again, something that I can’t quite put my finger on but is present throughout their range and I find vaguely unpleasant.
It’s a mix of limp, flabby almost not-even-there malts and a pinch of hops so slight as to be inconsequential.
With Reserve you also get a nasty alcohol burn too, it’s acidic, acrid, teeth curling.
Right at the back there’s a rounded toffee thing desperately fighting for air but being beaten down by the GK killing machine.
Oh, and this is not an IPA.
It almost makes me physically angry that they’re trying to sell it as such.
What this is is a moderately unpleasant, definitely uninteresting beer with a scouring alcohol that has just started to give me acid burn in the pit of my stomach.

For the record, with both these beers I made sure that I tried them as my first beer of the evening so as to try them with a fresh palate.
I’m afraid that even that didn’t help.
I’m sure the Greene King Marketing Machine will win the day though.

28 Responses to Greene King Do The Wrong Thing