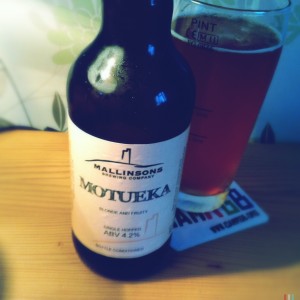 Another single hop beer and this time it’s a hop from New Zealand with I name I’m not sure I can pronounce properly.
Mind you, I don’t really care what it’s called or how you say it when it tastes this good.
I poured this bottle badly so tere’s a bunch of stuff swimming about in what would have been a lovely tangerine coloured beer.
And that colour is very fitting as Motueka smells, no reeks, of tangerines and oranges.
Beautiful juicy overripe tangerines and oranges.
I’m probably wrong, and I’m sure there’ll be someone ready to prove me so (there usually is) but I’d guess that the malts here are the same as with Mallinsons’ Citra that I tried previously, a light caramel and wheaty burned sugar biscuit that gives just enough of a body to back up the hops.
Lots of people seem to love Citra and lots of people seem to love Nelson Sauvin, but right at this moment, drinking this beer my heart lies with Motueka.
It has such a different feel to the other single hop beers I’ve tried.
It’s resinous and oily with hints of jasmine, it has the most intense bitterness that pops up, singes your mouth and then disappears only to jump back up again with the next mouthful.
There’s a huge orange presence here, full of juicy (that word again), fleshy flavours, wrapped in peel and pith.
Stewed with dates, a pinch of sea salt, mixed spice and jelly sweets, there’s even a big bunch of tarragon in here.
This is single hop heaven.