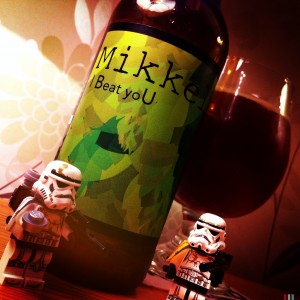 This beer is so dangerous to the Empire that it comes with an Imperial Guard.
My guess, and I’m probably wrong, is that this is Mikkeller’s version of BrewDog’s Hardcore or Magic Rock’s Human Cannonball.
If I’m right then it’s harder and has more balls than either of its contemporaries.
The bottle opens with a “Shhhh”, that suggests you’re about to be told dirty secrets, and in a manner of speaking you are because this beer is kids’ toys and sweets for grown ups.
Cheap and nasty jelly sweets doused and soused in white rum, you can taste foam bananas and prawns, and I’m pretty sure that the same mind that thought, “Kids’ sweets should be shaped like bananas and, um, PRAWNS! There’s a match made in Heaven,” is at work here.
The malt is fried banana with a length of dowel hidden in it so that it does damage as it smacks you across the cheeks, and the caramel has sharp edges as though it’s been spread very thinly before being shattered to created a very pointy sweetie weapon for the roof of your mouth.
The hops are wearing biker boots with nettles and brambles tied to them and they don’t mind giving you a kicking.
If the Death Star was a Double IPA it would taste like this.
No wonder there are Stormtroopers guarding it, they wan to keep it for themselves.
Call for the Rebel Alliance!