I know very little about the Nils Oscar brewery other than it’s based in Stockholm, Sweden and began in the mid 1990’s.
I’d seen their lager for sale in Waitrose and not taken much notice, but then when I saw a range of their beers online my interest was piqued and I decided to have a try.
This is what I found (apologies in advance for my Jilly Goolden moments). 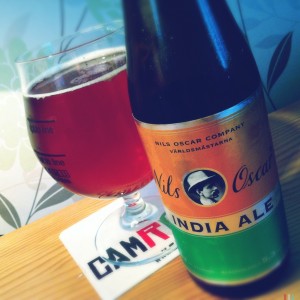 India Ale (5.3%)
Sitting in my glass a warm and glowing rusty amber with just a wisp of head, this beer has a delightful woody aroma, dry and satisfyingly old fashioned.
All the flavours here are dark and woody too.
There’s a treacle thick pudding at the base, it forms a good strong backbone and is topped with crushed almonds and walnuts.
Seasoned wood runs right through and, like smelling the the desks in your old classroom, this India Ale is full of nostalgia.
Flavours of yesteryear almost, the hops are dry leaves that crunch and crackle through your drink, leaving sepia tinted tasting notes.
Citrus sharpness and a wind blown dryness finish, and it’s like drinking a beautiful old photograph of beer. 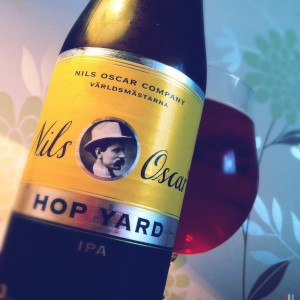 Hop Yard IPA (7.3%)
This little bottle of delight contains a beer that pours a deliciously deep red wood amber.
I feel a theme coming on with this brewer’s pale ale styles, and that’s a big yummy woodiness.
You see Hop Yard smells of sweets and cinnamon and booze and wood.
It tastes ever so slightly of dandelion and burdock mixed with white rum and melted Daim bars, and hiding round the back is a forest full of resinous pine trees.
OK, this beer is from Sweden but it take sme back to my time in Vestfold, Norway, wandering through beautiful dense woods and fishing on the Oso fjord in the very early hours.
It has that crisp, clean, snap of cold fresh air that makes all your senses pin sharp.
Raspberry bitterness pricks at you, a sparkling homemade lemonade carries the citrus.
Tangy like decent lemon curd but not eye watering with bitterness, there’s also a lovely big slug of maple syrup.
And then, right at the end, there’s a wonderful dryness with a little campfire smoke that hangs around for ages.
In a word, superb.

Kalasöl (5.2%)
What a beautifully coloured beer this is.
It’s the most sensuous deep ruby red and it simply glows.
Sadly there’s not a huge aroma, just a little biscuit and a little alcohol.
Where it lacks in aroma it makes up in a big punchy flavour.
And the flavour is BISCUITS.
In capitals.
They’re enormous.
In fact they’re so big I’m not even sure I’m enjoying it as it gets a little cloying.
It’s so oppressively dry, crumbly, digestive-wheaty-burned-around-the-edges-shortcake-biscuity that it quickly becomes overwhelming.
What it’s begun to remind me of the most is a Shepherd Neame brew on steroids.
There’s a touch of toffee and I can hear some lemony hops shouting hello from a locked room right at the back.
All in all this ‘party beer’ (if I’ve got the translation right) may look beautiful in the glass but it’s not in the mouth.
Perhaps it’s just not my kind of drink.
Never mind, two out of three isn’t bad.

2 Responses to Nils Oscar: A Swedish Pack Of Three