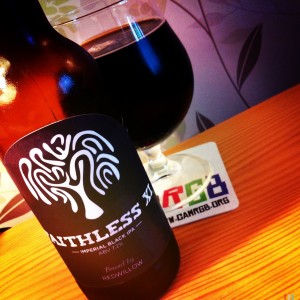 I’ve wanted to try something from this brewery for ages and so when a bunch of their beers appeared in The Offie I just had to grab one of their Imperial Black IPAs.
Sadly, unless I happen to have had a bad bottle I don’t see what the fuss is about at all, because this beer isn’t just flat, it’s water thin.
The aroma is sweet liquorice and farmyards – My wife said it smelled a bit like pig manure and I can see what she means.
There are some decent flavours going on, cola bottle chewy sweets and sherbet, intense liquorice laces, coffee and a big bag of Maltesers.
The finish is dry and toasty, spiky with thorn bushes but the flatness really makes this a rather unpleasant experience.
So much so that I’d pour it away if it wasn’t so expensive.
I have it on good authority that Redwillow beers are usually very good indeed and so I’ll hunt out something else to try.
What a shame.