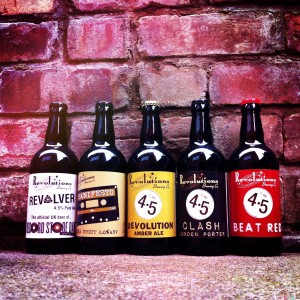 Right back at the beginning of CAMRGB I did a short interview with Andrew and Mark of Revolutions Brewing, first and foremost because they’d just moved into their newly built brewery, but also because one of their first brews (and their very first attempt at bottling) was an IPA made for the launch of my band’s then latest album. Andrew and I have known each other because of music for several years BB (Before Beer) and it had been with interest and enthusiasm that I’d watched him begin his journey into making beer. So, all these months later, Revolutions have established themselves as Beer Festival regulars and cool new brewer on the block to watch out for. They’ve managed to continue to make beers related to records that they love and package them with pump clips (many of them that I’ve designed – yes, there’s a vested interest) that reflect on the albums the beers allude to. I’m revisiting them now because they’ve just had their core range bottled. It’s the first bottles they’ve made since their Sarandon’s Age Of Reason IPA in March 2011 and lots has changed since then. As a set, the beers look great (I’m allowed to say that as I didn’t have a hand in any of them), they look like you’d want your record shelves to look, or your favourite band. But what’s important is how do they taste? 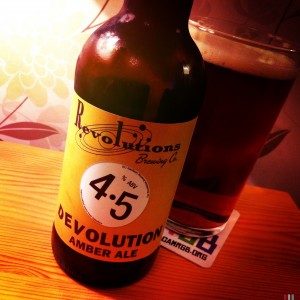 Devolution Amber Ale (4.5%) On taking a big gulp of this dark amber ale I was overwhelmed by a super dry earthy biscuit flavour. It was almost too much, but fortunately it disappeared as quickly as it had arrived and left behind it a rather complex mix of light toffee, lemon juice and brown grassy digestive. Not too disimilar to that ‘signature’ flavour you get from Shepherd Neame brews, the hops take it a decent step away from Bishop’s Finger with a wash of elderflower and citrus and the finish is very long indeed. Devolution is a decent beer but not my favourite by a long chalk due entirely to my personal dislike of the Shepherd Neame character. 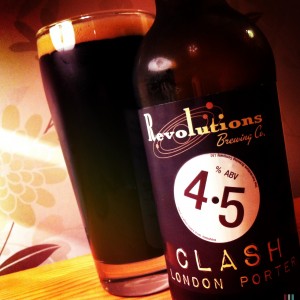 Clash London Porter (4.5%) On opening the bottle this beer smells of Bourneville chocolate bars. This is a good thing. Sitting deep and dense in my glass, this is one hell of a good porter, and this is the bottled and filtered version. The bitter chocolate is huge but it doesn’t beat you up as it’s tempered by a great big cup of coffee and a couple of fizzy love heart sweeties that combat the tang with a lovely little sweet sherbet hit. Floating around all this is a delicious bunch of hops that give you autumnal brown leaf crunch and some undergrowth and muddy dampness. Does that sound unappetising? Think of it in terms of your favourite wellies and a bit of an adventure before getting home to a lovely red fruit crumble. If Revolutions make rock’n’roll beer then Clash London Porter is, for all the right reasons, the mega star, trout farming, salmon fishing, country life end of the rock career. Terrific. 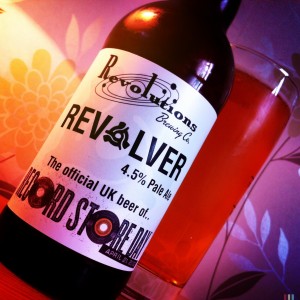 Revolver Pale Ale (4.5%) This is a straw coloured light pale ale brewed specially for International Record Store Day 2012. It’ll be available in some of the bigger record shops (including Rough Trade and the Revolver stores) and I’ve been lucky enough to have been given an advance bottle. The aroma is light and floral with a touch of honey, there’s a good spicy pepper bite, a handful of digestive biscuits and some decent burned sugar caramel that provides a fine body that rounds out the beer and provides a base from which the hops launch themselves. They’re not fierce but they are loud enough to give you some excitement with sharp citrus, slightly smokey leaf mulch and a satisfyingly crunchy dry finish. Not an earth shattering beer, but a damned good drink nonetheless. 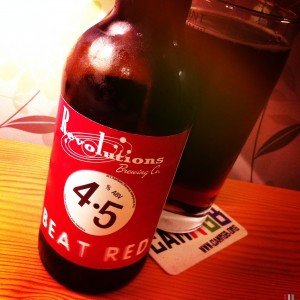 Beat Red (4.5%) I remember sitting in The Hop in Leeds, pouring with sweat having just played a gig for Revolutions Brewing and talking with Andrew and Mark about beer. We came to the conclusion that last year (2010) had been the year of the Black IPA and that next year (2012) would be the year of the red ale. RIPA anyone? This is Revolutions’ version and I honestly believe it’s the best beer they’ve made so far. Beautifully deep ruby red in the glass, the flavours are superb. Great big dry leafy hopping that gives crisp and crunchy autumnal woodland, all orange and red and yellow, drenched in maple syrup and crusted with red chilli flakes, black peppercorns and resinous pine sap. The smell is treacle toffee and red liquorice laces and the finish is intensely dry and long and lingering. I could happily drink this all evening. 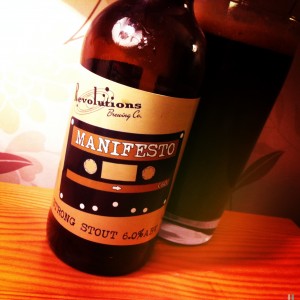 Manifesto (6%)
Revolutions’ strong stout is a belter.
Black as pitch?
Not quite.
Instead it’s the colour of melted dark chocolate, it looks creamy and thick and satisfying, and it is.
The smell is espresso, chocolate and stewed fruit, all of which follows through to your first mouthful.
First you get chocolate, bitter, rich and tongue coating that then gets rinsed away by a good strong coffee.
And then you’re given a bowl of booze soaked plums cooked with a pinch of star anise.
To finish it all there’s a strong leafy cup of black tea, it has lots of greenery and just the slightest waft of citrus before going all dry and long and lovely in the finish.