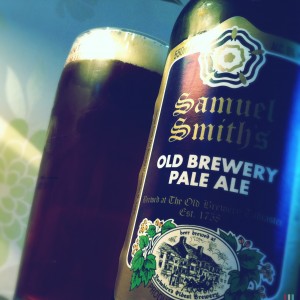 I said a little while ago that I was going to write a whole piece about this brewery, and I still intend to but other things get in the way.
In the meantime here’s their Pale Ale, which doesn’t pour very pale if I’m honest, it’s more like a Best Bitter, dark chestnut with a fantastic creamy head.
The smell is fruits and a hit of yeast which I’d guess comes from the fermentation in Yorkshire Squares, though if I’m wrong I’d be grateful for an explanation.
All the flavours here are pretty robust for a Pale Ale too, big and fruity and very satisfying.
Deep rum and raisin, a hint of brandy, chocolatey digestives, a pinch of liquorice and some good old peppery spice.
Eye of newt, leg of toad.
Sometimes I feel like that’s what I keep saying.
The hopping isn’t enormous but it’s there and it’s bitter and it’s dry and it provides a freshness that lifts the beer, removing the malty weight form your palate and readying you for more.
I will write a piece on this brewery and the negative things people have to say about them and how they operate, but they don’t half make good beer.

NB: I have just been informed that Samuel Smith’s have stopped brewing this beer. If you see any grab it, it’s a becoming a rarity.