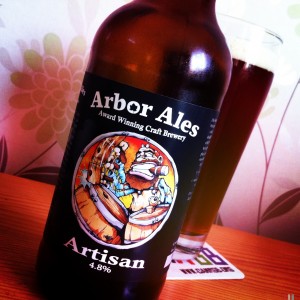 This is quite a light beer for Arbor, but it still packs a quite considerable punch.
Artisan is the brewery’s take on a Best Bitter and it’s a thing of no little beauty.
The beer is a conker red with a creamy head that hangs on in there while you have a sniff around.
Sticking your nose in gives you fruits and biscuits, rather like the raisin shortcakes that my children like.
But there’s a freshness in here too, apple juice and a background yeast that smells good.
Taking a big swig you first get the traditional bran filled biscuit swishy caramel and burned sugar bitterness, which is so far so typical for a Best Bitter.
But that’s where this beer stops being a typical bitter and becomes well and truly an Arbor version.
You see, Arbor can’t help but assault you with hops.
It’s like a pathological need to singe your synapses and scour your palate with fresh zingy zesty hoppy dryness that squeezes your head like a sponge, removing all the moisture therein.
And it’s that fun, that joy, that you can taste in their beers, that I just love.

One Response to Arbor Ales Artisan (4.8%)