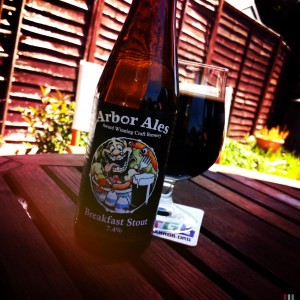 I wasn’t quite brave enough to try this for breakfast, but as an early lunchtime drink it’s still pretty big.
Made with Brazilian coffee beans and cacao nibs, along with a load of oats, this beer is sitting in my glass in a worn black biker jacket just daring me to drink it.
I just stuck my nose in to get a whiff and was slapped back by a big gloved fist full of warm booze and creamy coffee.
It won’t beat me though, I won’t let it.
Ooh, this really is a bit of a beast.
Thick and unguent, it sits on your tongue and holds it still while the coffee pinches you awake, pulling your eyelids back so that you have no opiton but to stare as the rich bitter chocolate tickles and massages your senses, making you go a bit weak at the knees.
And then the hops grab sapling switches and start the bloody process of wipping you into a dry, crisp, heavenly submission.
This is a big beer, a mean beer, a sadistic beer, a wonderful beer.
The only problem is that on a boiling hot afternoon in the back garden, it’s a little too hefty and thick to quench my thirst.
But that’s my own mistake.
Next time I’ll have it late at night in front of the fire, in my rubber pants.