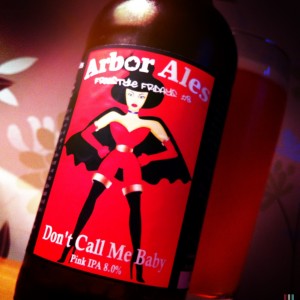 I’ve not had any beer from Arbor Ales for ages and boy oh boy what a way to get back into them.
At 8% ABV this Pink IPA is a monster.
A beautiful monster.
Pouring a viscous amber with a decent head, it smells of mango and peaches and cheap jelly, this is a fun beer with a massive drunken punch, and though the beer doesn’t look particularly pink, it doesn’t half look good.
Where it lacks in appearing pink it makes up a thousand fold by tasting of nothing less than eating pink grapefruit.
And I mean really like eating pink grapefruit.
There’s a burned sugar malty roundness but it’s way in the background, this is a half a grapefruit doused in demerara sugar with a splash of rum and a handful of bouquet garni rubbed into its flesh.
Greenery moves around the edges of this beer and provides a delicious body that takes the harshness away, and then there’s a finish  made from the dryest, most leafy sexiness you could imagine.
It’s good to have Arbor back in my glass.