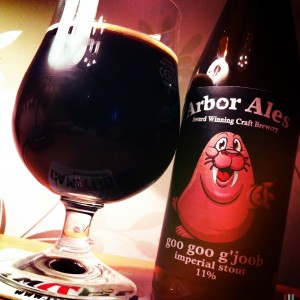 This little Imperial Stout was brewed to mark five years of Arbor Ales.
Did I say little?
I meant gargantuan.
Goo Goo G’Joob is one hell of an Imperial Stout.
It pours as thick as road tar and looks about the same colour, holding onto just the merest ring of bubbles for a head.
But even these are interesting, coming on a rich cappuccino colour.
Taking a whiff your head is filled with chocolate digestive booze and sweets, while the first mouthful uncovers this beer as an absolute beast.
And it doesn’t feel its strength.
Oh no.
It feels much much bigger than that.
Huge waves of flavour keep rolling over you, bolstered by alcohol warmth, you get dense plum pudding with flaming brandy on its top followed by a decent coffee, before dry bitter chocolate and just the merest hint of marmite.
Then in comes the maple syrup that’s been added to the brew.
It brings with it a deep sweetness along with a delicious resinous and oily body that grabs you and flings you face first into the mountain of hops that Arbor have snuck in.
As I’ve said before, this brewery just can’t help it.
They just have to put as much hops as they can into everything they do.
It gives a lovely fresh, green and bitter finish to this beautiful monster of a beer.