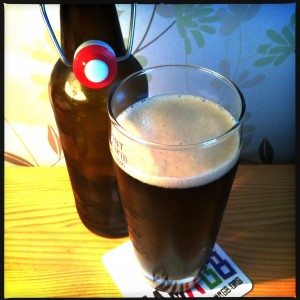 BAD are a home brewing and pub visiting collective based in Leicestershire.
They brew in various locations, sharing costs and collaborating on beer making.
The Christmas Ale that they were kind enough to give me to try is based on JW Lees’ Moonraker and is pretty good, pouring a hefty mahogany with a nice foamy head, with some nice spicy smells.
As I took a sip I got a gasp of vanilla which was unexpected but certainly not unpleasant, and then with my first mouthful I smiled.
I worry about trying people’s home brewed beer as I’m unsure of how positive I could be if I found them undrinkable.
No need to worry with this though.
You get a big fat digestive coated in toffee and speckled with sultanas, a fistful of crushed white pepper, a side order of liquorice root, and a friendly splash of rum.
For me the hops aren’t big enough though.
I’d like something really crisp and dry to offset the round pulpy, meatiness of the beer.
That’s a really small criticism though, as this is way more than drinkable, and you do get a light dry bitterness at the end.
All I can say is that I hope I’m offered more.

Thanks to Chris and the rest of BAD for allowing me to try their beer.