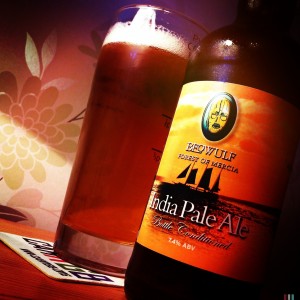 Holy moly, this is one hell of an IPA.
The aroma here is almost unpleasant, a very harsh citrus that borders on being a bit eau de urinal.
Fortunately it just about escapes and makes up for its smell with its intense and immense flavour.
Beowulf have made an IPA that may only appeal to some of the more hardcore IPA fans and hop heads.
There’s a malt presence here of course, but it’s almost the gimp of the beer, locked in a box and used and abused solely to provide a background for the sadistic hops to do their thing.
And so, over the light caramel, the hops are simply enormous.
They do nothing so much as EXPLODE.
Massive hits of lime and lemon are squeezed directly into your face, grapefruit zest is grated and rubbed into your gums.
There’s a superbly harsh bite to this beer, and it all ends with a pretty sensational long dry bitter finish.
Wowsers.
I for one will be looking to try more Beowulf beers.