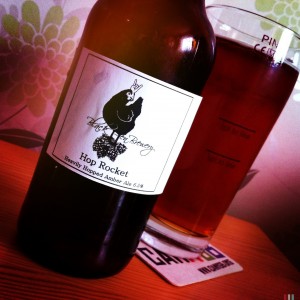 I think Andy and Fergus may have sent me this for the #DownDIPA night, but I just couldn’t resist.
I hope they’ll forgive me.
Anyhow, what can I say except, man alive the hops are gigantic!
This dark amber ale pours with an explosion of fruity sweet shop smells that tell you from the syart that this is going to be a bit good.
A rounded biscuity toffee tinged malt starts taste proceedings and comes on like the classroom podge with the glasses held together with a plaster, getting your attention by being genuinely nice and rather funny.
The thing is, he’s the secret evil leader of a big gang made up of Columbus and Nelson Sauvin hops that have spent ninety minutes getting blasted before smacking you square in the teeth with weapons made from dry hopped Chinook.
What’s that mean?
It means blazingly dry, sexy red wood resins, lemongrass, thyme and coriander, grapefruit skins and lemon juice.
It means a sun scorched finish to shrivel up your face.
But mostly it means one hell of a good beer.