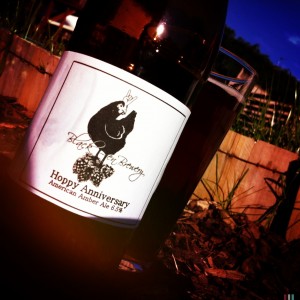 Yet another winner from my favourite home brewers, this American amber ale has been brewed to celebrate a year of the Black Hen Brewery.
And what a way to celebrate.
Hoppy Anniversary pours a yummy dark amber with the merest trace of a head.
Made with a blend of four malts – pale, amber, caramel and Munich – the aroma is crunchy peanuts in caramel with a background of spice from the Centennial, Cascade and Citra hops.
The initial flavour is melted toffee with biscuit chunks.
Imagine a Ben & Jerry’s ice cream in beery form.
Got that?
Right.
After chomping through that loveliness which comes with a side order of rum and raisin, we come to the hops.
Ferg and Andy like their hops and they’ve put a fair few in here.
Peppery leaf litter crispness, a big grapefruit bang from the Citra.
All pithy dryness with a lemon juice sting.
The finish is looooooong and good and full of fresh herby niceness.
Happy Anniversary Black Hen.
Happy Anniversary Ferg and Andy.
You still remain my favourite home brewers, and you still give a good many professional breweries a run for their money.
Cheers.