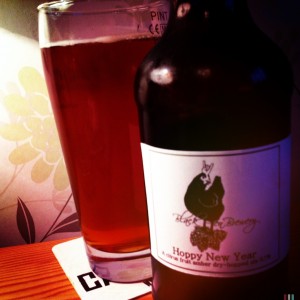 Described as a “Celebratory brew to see the New Year in in style,” I’m a bit late to the party but man alive do I love Black Hen beers.
Run by Fergus and Andrea (and this beer brewed by Andrea), Black Hen seem to effortlessly brew superb drinks.
I don’t think they’d mind me calling them unashamed Hop Heads, and in their shed they consistently prove that the beers created by home brewers can be every bit as good as, and very often better than, a professional brewery.
Hoppy New Year pours a beautiful amber and smells of lemons, peaches, apples and fruit cocktail sweeties.
Your initial mouthful is a full on smack in the face with roughly crushed mixed peppercorns, black for heat and red and green for flavour.
there’s a lovely flighty toffee here too, it’s only subtle but it’s got just enough power to create a decent body.
As with most of the beers from this brewery, this is really a celebration of hops, and boy oh boy the hops are good.
Firstly they give the beer a sexily oily mouthfeel (not a word I use often as I try and steer clear of beery clichés), coating your tongue in a most luxurious way.
Then they sting you like nettles, kiss you with pretty meadow flowers, and poke you in the eyes with sharp lemon segments cut into spears.
As you wipe the tears away the other hops – the ones that have been hiding around the corner – go all grass green and hedgerow sappy on you, which gives a super long dry finish.
Some proper breweries ought to take note – This is how beer CAN taste.