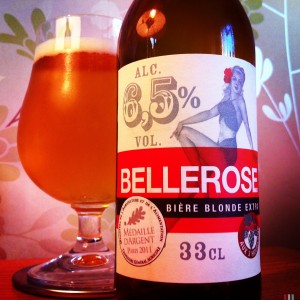 Well this is a new and delightful experience.
According to its press, Bellerose is based on a French beer style from the 1950’s and combines in modern parlance, traditional Bière De Garde brewing with the IPA hopping of 21st century craft beer.
The beer pours a lovely bright gold and retains a good foamy head throughout, and you get a good fiery pepper kick in the aroma along with some nice summer flowers and caramel.
On taking a big glug I was initially met by some good saison flavours, that dry metallic yeast underbelly coated in honey, and this was complimented and enhanced by the snap of fresh ginger.
You get mace in here too, tempered by a gently browned sugar syrup which hangs around in the beer’s oily texture.
And then there’s a bunch of hops.
Like a handful of dried herbs they’re full of texture and flavour.
There’s a sage leafiness and some woody rosemary.
It’s just struck me what this beer can most easily be likened to and it’s for this reason that it won’t necessarily be everybody’s cup of tea.
It reminds me a lot of the herbal sweets that my grandfather used to have in his pocket at all times.
He’d give me one and I’d be confused by the strange flavours that I found so yummy.
And in the same way I like the subtly spiced Bellerose a whole lot.