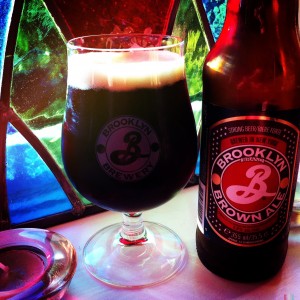 I was quite looking forward to this, but now I’ve started it I’m rather disappointed.
It opened with a decent enough hiss and it smells of, well, very little actually.
The merest hint of malty biscuit is about your lot.
One thing I will say for this Brown Ale is tat it’s a very nice mahogany with a cute ring of a head.
The very first mouthful I took was quite biscuity, digestives and maybe shortcake, but then there’s this lemony thing that happens.
Not a fresh and yummy bitter lemon though, it’s more a harsh and coarse washing up liquid type of citrus.
And underneath you get a lick of Marmite.
And it’s somebody else’s Marmite.
It’s had their knife in it and so is peppered with bits from their kitchen.
No, I’m sorry, I don’t like this at all.