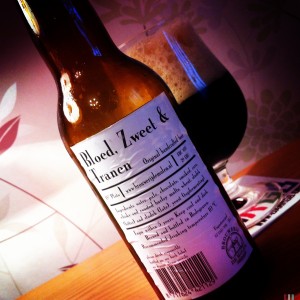 Hello De Molen.
I’ve not seen you in a while.
How are you?
You’ve taken up smoking you say?
Smoking your beer that is?
Nice.
De Molen’s Blood, Sweat & Tears is the first smoked beer I’ve had from them and my bottle was really feisty.
So much so in fact that I had to pour it into two glasses to combat the lava like flow of foam that was created by opening the cap.
The aromas here are malty chocolate biscuits in front of an open fire, a smell that I’ve not had since my last bottle of Paradox Smokehead some eighteen months ago.
And the aroma here is really three dimensional, helping you feel the smoke around you as you take a drink.
As with all this brewery’s beers (so far for me at least) the flavours here are beautifully balanced.
Meaty biscuits and red fruits create the base, but they’re toasted rather than stewed and so give you a very nice burned bitter feel.
Sladek hops pop up here and there with such a lovely tempered dryness, wafting through so gently that the snap of twigs and the pithy sap flavours are almost ghosts.
Over all this blows the woody smokiness, filling the corners of the beer and making it, in the words of Edwyn Collins, simply thrilling honey.