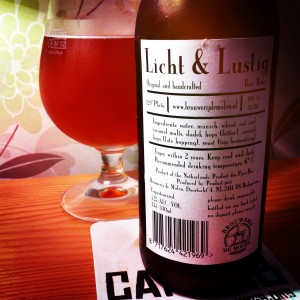 Is this De Molen’s version of a wheat beer?
Is it a Weiss?
It’s called Light & Cheerful and pours a cloudy orange with barely a head to speak of, and smells of camomile, star anise and mace.
It’s not strictly a wheat beer though there’s plenty in the ingredients.
And it’s not a Weiss though it shares some flavour characteristics.
I can’t for the life of me put my finger on what exactly this beer is trying or meant to be.
Perhaps it’s simply trying to be nothing more than another delightful beer from this brewery.
Licht & Lustig tastes thick and creamy thanks to the oats in it, and you get given a lovely soft fudge caramel to chew on, a slice of fried banana, some liberally sprinkled pepper and a lick of honey.
The hops bring oranges and mango to the table and serve them up wrapped in a sesame coated mandarin peel, before a soft and warm dryness kicks in that leaves you smiling and ready for more.
Light & Cheerful, a perfect description.