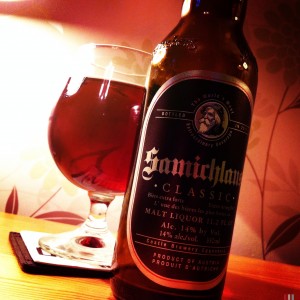 Rather than Googling it, perhaps someone can tell me if Malt Liquor is the same as Barley Wine, because it looks and smells and almost tastes that way.
Pouring a glowing rusty red, Samichlaus stinks of bruised apples and pears.
It’s almost sickly sweet, packed full of orchard richness and simply far too sugary for my palate.
Personally this would work far better for me as a spirit served in a shot glass, as opposed to half a pint of candy floss heavy, barely bitter sugary booze.
So, a really short review here, and one that says far more about me and my tastebuds than about Samichlaus.
I’ve thoroughly enjoyed the Barley Wines I’ve had in the past, particularly the De Molen and BrewDog ones, they’ve retained a hard and bitter hoppiness that, I suppose, I can get my head around.
But this is just about the alcohol and the sweetness and so, classic or not, I don’t find anything here that’d make me want Samichlaus again.