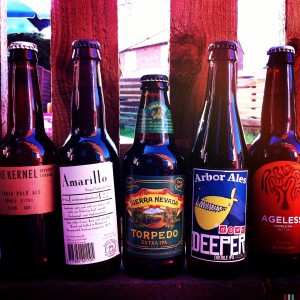 Well now.
Last night was the #Down DIPA Twitter event and, though it didn’t get quite as many people as the #impoff of a few weeks previously, still had a decent number taking part and everyone seemed to have a good time.
And the reason for #DownDIPA?
A simple celebration of the Double IPA.
My evening began at around 6:30pm, it had been a very long and very warm spring day and I simply couldn’t wait any longer.
My chosen beers for the evening were Sierra Nevada’s Torpedo (7.2%), RedWillow’s Ageless (7.2%), Brouwerij De Molen’s Amarillo (9.2%), The Kernel’s Double Citra (9.8%), and Arbor Ales’ Down Deeper (10.2%).
I started with Torpedo, an old favourite and regular in my house, and sitting in my garden in the cooling evening I made the following notes,

Never tire of the woody resins and the bitter hop sexiness.

I think that just about sums it up perfectly.
At around 7pm other people had begun to tweet along in earnest and the party began to really get started.
All over the place there were bottles of very good beer being opened, shared, enjoyed and talked about.
My next beer was RedWillow’s Ageless, a beer I’d not tried before. 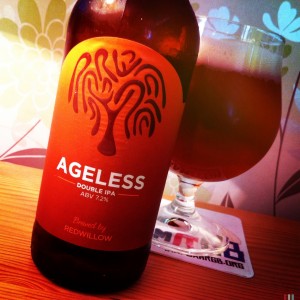 RedWillow Ageless (7.2%)
I like the foam on this beer.
It’s like the sea.
The smell here is orange marmalade and brandy, which is fine by me, and there’s a good hit of yeast too.
Ageless is a deep mandarin colour and it begins with the slightest hint of caramel.
Almost an apology.
An apology of caramel.
There’s a feisty pepper and a good handful of herbs, and then it all goes fiendishly bitter and dry and hoppy.
A Brillo pad dipped in elderflower water gets pulled across your face, leaf mulch and pine needles, along with thick honey and super pithy hazel sap, all make for a very lovely bottle of beer.

At some point in the proceedings my wife appeared with a pizza and we watched a little Eurovision before she quite rightly asked, “What the hell are we watching this for?” and went to bed.
Conversations on Twitter included the usual swapping of tasting notes, friendly jibes and (mainly from me) slightly drunken cries of, “Chhhheeeeeeeaaaaaarrrrrrrrssss!!!”, whenever a new face joined the party.

My next beer was Brouwerij De Molen’s Amarillo, which somebody had said was a single hopped beer even though I could clearly see on the label that it also contains Sladek and Saaz. 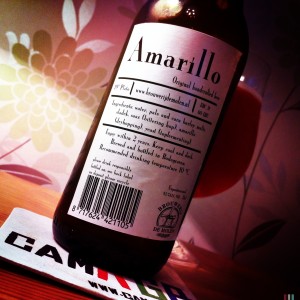 Brouwerij De Molen Amarillo (9.2%)
Now this is the business.
Smelling of tangerines and looking like a glass of runny honey set in amber, this is a very very dangerous bottle of beer.
And why?
It doesn’t feel anywhere near its ABV.
There’s an almost overwhelmingly lovely essence of passion fruit and clementines right at the heart of this beer.
And a big bag of kids chewy sweets too.
But I’m really struggling to feel the alcohol, it seems so light, with a wispy, fun toffee body and heaps of hops.
Sladek (a De Molen staple), Saaz, and then shed loads of Amarillo.
I love you De Molen.

It was inevitable really.
At some point in the evening I was going to listen to Staus Quo’s “Down Down”.
It had been mentioned on Twitter earlier in the day and I’d defended the Quo, as I always will, pointing out that I appear to own more Status Quo LPs than Fall LPs (and I have a lot of Fall LPs), that the name for the evening’s event made everyone think of “Down Down”.
As I listened to it I read Oh Beery Me‘s review of Arbor Ales’ beer.

And then I poured The Kernel’s Citra.
I reviewed this beer only a few weeks ago so I won’t go into it again other than to quote from my now slightly wobbly notes.

As The Quo ended and World Domination Enterprises took over my iPod and my brains, I read this from Matthew at Total Ales.
I’m not sure how he managed to string sentences together this well considering he was at least as far into the beers as I was, and I also think he’ll regret using the words “Illustrious Leader” and my name in the same sentence.

And then I opened the Arbor Ales beast. 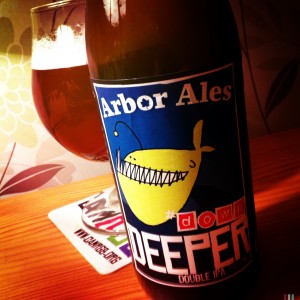 Arbor Ales #Down Deeper (10.2%)
Almost everybody already knows that there were some conditioning problems with this beer.
A bit rushed perhaps, Arbor openly said that it wasn’t what they wanted it to be.
But is it any good?
Well, it definitely has some problems, like that bitter butterscotch thing.
That said this holds up, not as a Double IPA, but as a Barley Wine.
Intensely fruity and steeped in white rum this is tantamount to a supercharged, hyper hopped alcopop.
It dries your entire head, leaves it wrinkled and pruney, but happy in its leafy green hoppy brutality.
This beer tastes as though it was designed to be a monster.
And it is a monster.
It’s just not quite the monster we thought it would be.

I feel bad for the guys at Arbor, they were so excited about doing a beer and I was very excited about getting to do a label for them.
This is the downside of experimental brewing.
Experiments sometimes go wrong.
Or at least go in the opposite direction.

With that I went to bed.
But not before pronouncing the following:

In the cold light of day with a black coffee in front of me do I think it was a good night, a good event?
Absolutely.
Maybe there were fewer people taking part than previous events, but those that did seemed to be having a lot of fun, making new connections, and drinking some pretty special beer.
Thanks to everyone who took part and to everyone who really does make CAMRGB so very special
(And it is you know).
Cheers.

Note: A special thanks to Mark for drinking his #Down Deeper at about 10:30am and writing a review about it, thus proving he is the unopposed Head of the CAMRGB paramilitary wing.