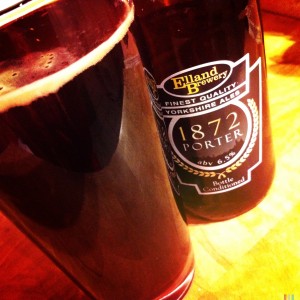 Based on a recipe from 1872, this is one hell of a porter.
It smells like a chocolate bar in a damp cardboard wrapper, all pulpy but hiding something good.
And it’s as black as the blackest black thing being sucked into a black hole with Black McBlack.
This porter is dark.
And I don’t mean dark like HardKaur used to use it when she was little and would come into my office to play us her latest tune (choon).
It’s just an impenetrable blackness.
As you lift the glass to your lips you get a quick blast of sweet and boozy stewed fruit but it’s wiped away as soon as you take a mouthful.
I have to say that this is most definitely a Marmite beer.
Personally I love the enormous reduced meat gravy that sits at the heart of this drink, but there’s probably a lot of people who won’t.
The hops are dry and crisp and breathtakingly course, providing a little citrus respite form what is a full on beefy booze explosion.
I really like this, but you may not.
As for HardKaur, she left my office at Nation Records and went on to become a major Bollywood star.
So far as I know she still uses the term dark to mean something good.