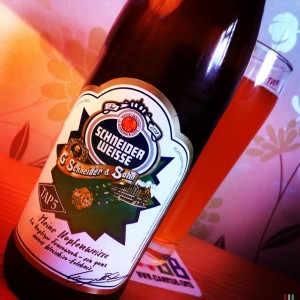 This is the 2012 brew and if all wheat beers tasted like this I’d be a certain convert to this style of beer.
I have to admit I’ve made a slight error in judgement with this beer though.
And that is that I’m so used to weisse beers being around the 4 or 5% ABV mark that I opened this for lunch without reading the label, so I fear that after finishing this I’ll be pretty much useless for the rest of the afternoon.
Tap 5 pours a honey hue with a wisp of head and looks thick, viscous and rather sensual in the glass.
Because of the high ABV the aroma is really amped up.
A wheat beer on steroids, the smells are spiced bananas, fruit sweeties and gingerbread.
The flavours are big and shouty too, with the main body built on caramelised bananas with a lovely burned dryness at the edges.
Then there’s a blast of peppery all spice, more than a pinch of nutmeg, and a dash of star anise.
The hopping is dry, palate cleansing and full of blackberry twigs and hazelnut leaves.
It’s all pithy, green and rustling with hedgerow goodness.
So I’ll say it once again, if all wheat beers were like this I’d be immediately converted.
Now, if you don’t mind, it’s 1:50 in the afternoon and I’ve drunk a pint of 8.2% beer.
I need a lie down.