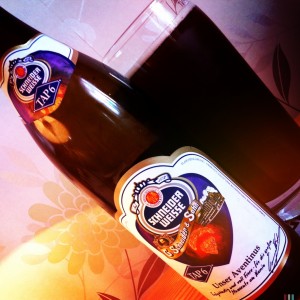 As I said in the review for the Tap 5 this time last week, if all weisse beers tasted like this I’d be a convert.
Tap 6 is a darker, heavier brew that pours a cloudy chestnut brown.
The aroma is a powerful and heady mix of fruits and spices, blending bananas, mace and damsons.
Dow at the bottom of this drink are the beautifully fried caramel infused bananas of Tap 5, but this beer is far spicier than its sister.
Big hits of star anise glow, mixed peppercorns spark, and plantain fleshiness provides a thick and unctuous feeling as you drink.
Towards the end a bitterness kicks in that becomes a warm alcohol tingle and turns the finish into a liquorice stick richness.
Personally I prefer the lighter Tap 5, but this is still rather good indeed.

As an experiment and after enjoying both last week’s Tap 5 and today’s Tap 6 I opened another bottle of Weisse that has been sitting on my shelf for several weeks as I’d not wanted to open it knowing I don’t like this kind of beer.
I poured it and sniffed it and took a big swig.
And it was thin and harsh and nasty.
Just as I remember this style of beer being.
So that concludes things for me.
Ramp up the ABV so I an get thick rich juiciness from a Weisse and I’ll drink it all day, but the ‘normal’ four or five percenter ain’t for me.