I recently got into a conversation about gluten free beers and was intrigued about how they might taste and almost as importantly, how they are made gluten free.I tried a couple that were made with various ingredients other than barley, malt, hops and yeast and was, how do I put it?
Disappointed.
Then I was introduced to Daas and in them I found some really good Belgian beer, two of which are gluten free (the Witte being the exception).
I exchanged some emails with the brewery about how they make their beers and was told that they are brewed as normal, after which, “we use a natural process to solidify the gluten (like when you heat the white part of an egg) and then we take it out by filtration.”
Now, I’m not overly sure if that sounds very appetising but if I am to stand by the CAMRGB notion that, “it is up to the brewer to decide how their beer is made and dispensed,” then I need to just drink these beers and talk about whether or not they taste good.

Ambré (6.5%)
Now then, this is dangerously easy drinking.
Ambré rests in your glass an orange amber and bubbles furiously, keeping its head a foamy cloud right down the glass.
The aroma is that delicious bready gaseous Belgian yeast with a hint of red fruit.
Then there’s a deep burned sugar syrup in the malt, a pepper infused caramel if you’d rather, with that yeast in the background that I just find so attractive, along with a good serving of pulped apple and pear that gives a sweet fleshy body.
But it doesn’t stop there.
There’s a subtle biscuit too, like a trifle base, slightly salty with just a hint of wheat.
Over this the hops are lightly spiced with cloves, tamarind and all spice, all snapping and popping on your tongue.
The finish could be dryer but it’s still rather good, all herbal and green and really rather more-ish. 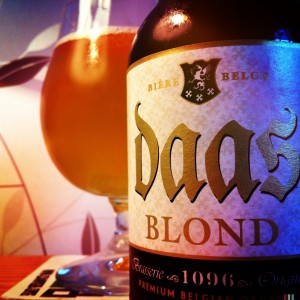 Blond (6.5%)
This beer tastes as though it ought to be drunk in the summer.
It’s a light sunny golden straw colour and, like its darker sister, it fizzes with life.
The aroma is again a little bit gassy, but this time tinged with a floral citrus hum.
Shortcake, honey and a soft metallic, peppery malt forms the body.
It’s great straight out of the fridge by the way, it allows the flavours to build aas it warms.
The hops here are all about lemon and lime and freshly mown grass.
By turns citrus zing and cut lawn pithiness, Daas’ Blond ticks all the boxes for an easy drinking Belgian beer.
Full of life, full of flavour and full of fun. 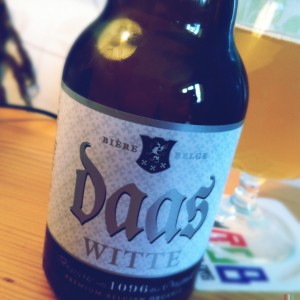 Witte (5%)
Cloudy and yellow isn’t the best start I have to say.
Coupled with that, as you’re probably aware, I’m not a big fan of this style of beer.
But with all that said, this isn’t bad at all.
Witte smells of apricots and yeast and flowers with a twist of lemon, so that’s not bad.
And it tastes subtley of bananas cooked in caramel.
A decent Belgian yeast cuts through and there’s a good peppery tone at the back.
The finish is short and sharp and reasonably dry, but I still don’t really get this style and I wouldn’t order it or even reach for another after drinking the first.

Thanks to Bob at the Gluten Free Shop for providing the beer.