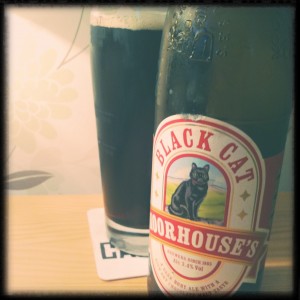 This beer is described as a dark ruby ale on its label but I’d say that if it looks like a mild and smells and tastes like a mild then it’s probably a mild.
Black Cat pours a deep dark black and hols its head for approximately thirty seconds.
It smells of a light bitter chocolate and the initial flavour is red fruit and coffee.
The problem here though is that the flavours are all very watery.
Everything in this beer hints of something big and dark and portery but unfortunately everything is very thin and a but flaccid.
I tried Moorhouse’s Pendle Witch and thought it very good.
This isn’t terrible, it’s just a bit uninteresting.