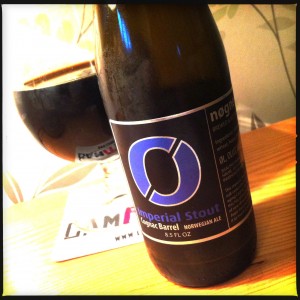 This Stout comes in a tiny 250ml bottle, and being served in such a tiny quantity you really hope that it’ll be as good as it suggests.
Nøgne Ø have taken a bunch of their stout and stuck it in an oak cognac cask for a year.
I have to say that the aroma isn’t all that, it’s got a touch of two day old damp flannel to it which doesn’t do anything for me that’s for sure.
The beer pours entirely flat and isn’t even vaguely interested in giving any head.
Not for me anyhow.
My initial mouthful held some decent stout flavours, with brandy steeped red fruit and a decent alcohol warmth.
Under that there’s a kind of alright biscuity thing going on, but unfortunately there’s a quite unpleasant off milk lactose thing that coats your tongue and acts as a beery prophylactic which successfully puts pay to any alcohol fuelled sexiness.
You’d think that sticking some excellent stout (and Nøgne Ø’s Imperial Stout is excellent) in a lovely cognac barrel would make for a superb beer, but this time it just hasn’t worked.
It hasn’t worked at all.
Perhaps that’s why they’re putting it in such tiny bottles.