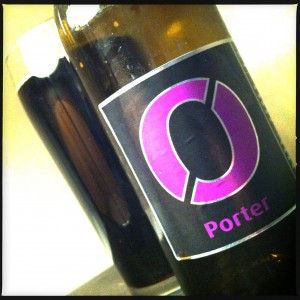 A few years ago this beer won an award at the World Beer Cup in San Diego and I can see why.
Perhaps I need reeducating but other than it being ever so slightly less heavy (and really only ever so slightly) I don’t see the difference between this porter and a stout.
I’m generally not a huge fan of porters and their thin feel and would take a bug chunky thick and powerful dark stout over them given the choice.
With that in mind then, is this a porter with a higher ABV or is it a stout?
Other than the very slight lack of weight as mentioned above, this isn’t far off being a terrific stout.
If we’re going to stick to calling this a porter as the brewery have christened it, then it’s a bloody marvellous one.
It pours black hole dense and smells of red fruits and chocolate liqueurs.
And then you take a swig and everything goes dark chocolate rich while the fruit you smelled gets plunged into smoky whisky.
Alcohol heat warms you through but never burns, black peppercorns pop and crackle, and prunes provide a delicious fleshy thickness.
There’s a bunch of hops here too.
They’re dry and crisp and they have just a hint of citrus, enough to brighten everything and freshen your palate.
So is this a porter?
It’s 7% ABV and big and fat and round and looks and tastes like a really good stout.
So there.