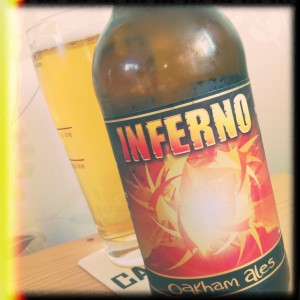 Made using hops exclusively from Yakima Valley, Inferno is very very sharp.
The beer pours an ultra light straw colour with barely any head and doesn’t so much glow as simpers in your glass.
The malting here is incredibly subtle, almost too much so, it borders on not being there at all and as a result for me this beer is missing a little much needed body.
It could do with a slightly bigger biscuity caramel to make it less one dimensional.
I suppose the argument is that this beer is all about the hops and don’t get me wrong, the hops are very good.
But they are immensely tart and lemony, stinging your palate into submission.
You do get a nice light honey in the finish but by then it’s a little too late.
With all that said, this is still a far better beer than most that you find on the supermarket shelves (I got mine in Tescos), but it’s not Oakham’s best by far.