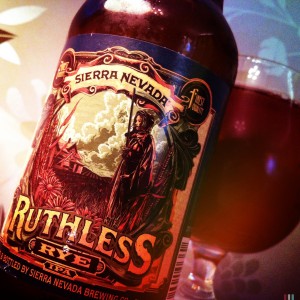 I’ve been looking forward to this bottle of beer.
It’s been on my shelf for two whole weeks and I’ve kept putting off opening it as I just knew I’d love it and didn’t want it to be gone.
And now I’ve gone and opened it I wish it came in a four pint milk carton.
You see, this is one hell of a good beer.
It combines the big dry heat hop hit of Torpedo with the crunchy dark sexiness of deep brown rye bread.
It’s definitely a grown up drink.
But don’t be put off if you’re not a fan of rye, because what you get here is the textural richness, the deep and dirty earthiness that rye has, rather than it just tasting of the grain as you’d expect if you baked with it.
It lends a super spice to the aroma too.
A little bit of chilli and a whole lot of sandalwood and herbs, not to mention a nice smack of liquorice.
And, as with the aforementioned Torpedo, the hops are to die for.
Explosively green and sharp, like tiny floral needles tattooing your tongue with the words “Hop Head”, there’s a rush I get with Sierra Nevada beers when they get it right.
A feeling of heart racing, head spinning excitement at the complexity and physicality of the effect from mixing a bunch of plants and grains together.
I don’t say this kind of thing very often, but if you see this beer buy it.
It rocks.