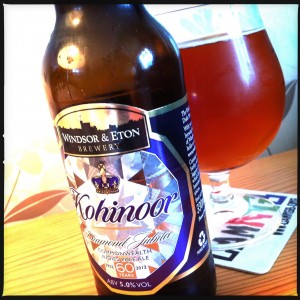 I could actually write a review for this Indies Pale Ale that simply says, “This is extraordinarily good,” and that would pretty much sum up Kohinoor.
But I suppose I ought to write a little more than that, so here goes.
This is Windsor & Eton’s second beer in a series of three that are being made to celebrate the Jubilee.
Kohinoor is named after a diamond and is again brewed with extra ingredients from the commonwealth.
This time it’s sugar cane, jasmine petals and spices.
The beer pours a deliciously bright orange but doesn’t really create much of a head at all.
The aroma here is where the jasmine petals begin, creating a light mist of perfume enhanced by a little snatch of all spice.
Kohinoor’s malts create a good biscuit base and the cane sugar gives the backbone a full bodied feel.
It’s in the whole leaf hopping that this beer really takes off though.
The spices kick in and hit your senses with spiky smells and peppery flavours while the hops go all golden leafed, resinous and oily, before turning so dry that they tingle as they leave the most exquisitely long finish you could possibly hope for.
Superb.