Ale to the King / CAMRGB Pub Tour of Edinburgh

After an ill omened few days of wind and wetness the sun finally beamed down upon the occasion of the Ale to the King/CamRGB Pub Tour of Edinburgh. 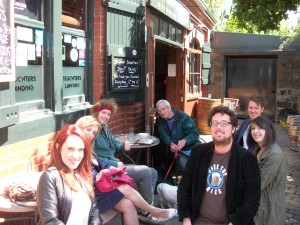 The epic trek was to encompass all ten of the pubs on Ale to the King’s Top 10 Best Pubs in Edinburgh List. An overly ambitious task you think? Well you may just be right about that.

The first pub on the list was the marvellous Teuchtar’s Landing just off The Shore in the upcoming Leith area of the capital. This charming little pub offered up a couple of nice little surprises; two gentlemen who were unexpected and welcome guests, bringing with them their dog and soon to be tour mascot Eddie, and the manager 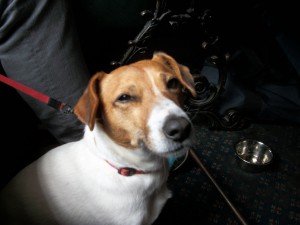 kindly extending the offer of free chips to the group (an offer on top of those already extended by other pubs)!

After a delightful pint of Emanation Pale Ale from Tempest Brewing Co. (fast becoming one of my favoured breweries) we waited a while longer for others to arrive, accompanied by a cheeky bottle of California Common from Knops Beer Company.

Making our way the short distance to the second pub on the list we met the owner of The Roseleaf Café Bar who was kind enough to extend a 10% discount to us on all drinks. My choice was The Rev. James, an English Bitter from Bains. A little tart for my taste, perhaps at that time at least! 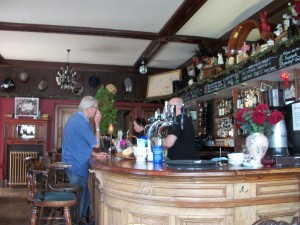 The owner of the Roseleaf also managed to help convince one of our non-ale newbies to a Maid in Leith, which I was glad to see continue. A fitting feat for the first pub to host a CAMRA meeting way back when it was the Black Swan. 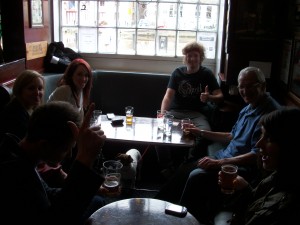 After this we journeyed on to the Malt & Hops, right on the banks of The Shore, a gloriously old fashioned ale spot. Here I personally enjoyed a lovely X15 by Tryst which has a refreshing sting to it, while others supped one of Tryst’s Cascade Pale Ales.

After rallying the troops we enjoyed a nice wee jaunt on 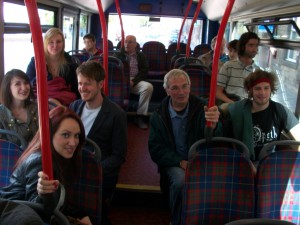 the bus through sunny scenic Edinburgh to the fine Stockbridge Tap. Another brewery fast climbing up my favourites list is Magic Rock Brewing. Their Highwire was delicious here while others tucked in to a somewhat disappointing Pentland IPA by Stewart Brewing.

Here at the Stockbridge Tap the challenge of what lay ahead began to feel all too real.
Perhaps the full ten pubs was unattainable, perhaps it wouldn’t even be wise to try.

As we strode forth we arrived at the near mythical Kay’s Bar, an establishment that even many Edinburgh born and bred are hard pushed to locate. As usual there was a great selection on tap. As more joined the 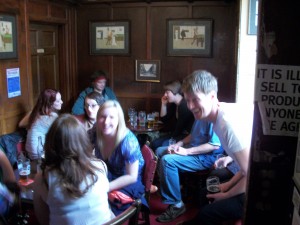 tour we enjoyed both a Diamond Reign by Castle Rock Brewery and an Inkie Pinkie by The Inveralmond Brewery.

Afterwards we headed off to Dirty Dick’s Bar. As I’d previously spoken to the manager he agreed to extend a 10% discount to our party. Alas the beer selection wasn’t so good that day but a cool, refreshing Bitter and Twisted by Harviestoun Brewery is never an unwelcome drop.

After this we headed to what would ultimately be our journey’s final stop, the Blue Blazer. Here a kind 20% discount offer was extended to us which we used heartily, but by this time more than enough had been drunk. After that amount of strong beer, it was time to retire.

Was attempting to tackle a full ten pubs too much? Yes. It’s a good job things ended when they did. But as the sun shone down upon the gorgeous capital it was actually nice to know that those pubs beyond our reach today simply allowed a reason to head out and explore them on another. 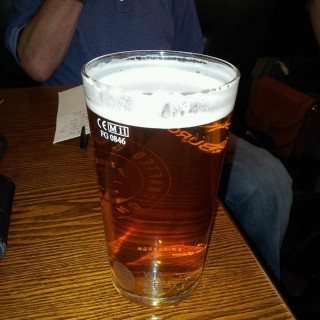