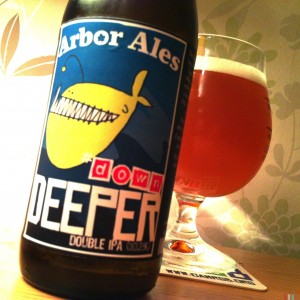 After the problems with the bottles of this beer in the run up to the #DownDIPA event, I decided to stick a bottle on top of my boiler (the warmest place in my house) and to leave it there in the dark for a couple of weeks.
All I can say is, “BUGGER ME! THAT DID THE TRICK!”
The warmth has helped the yeast get to work and Down Deeper now pours a rich and very fizzy marmalade with a lovely creamy foam head.
It smells intensely of chewy sweets and mango and booze and it’s a totally different beer to the flat and somewhat underwhelming drink of a few weeks ago.
You get a malt that just about holds enough biscuit filled toffee sweetness to keep things steady.
But only just as the hops are enormous.
They’re violent.
They’re mental.
They’re citrus blasts, fizzing with life, penny sweets pushed into your gums in the way that one or two of you might have done once upon a time with the last flecks of your speed so as not to waste any*.
There’s an almost brutal resin, a dry brown autumnal leaf crunch and a grapefruit presence so big it’s tantamount to spooning lime juice directly into your eyes.
If only this beer could have been ready when it should have been.
This is a cartoon deep sea monster of a beer and Arbor Ales still remain one of my favourite and, in my humble opinion, one of the UK’s best brewers.

*Note: Obviously CAMRGB does not condone drug use in any way, shape or form, and would frown at you in a disapproving way should you do anything illegal.