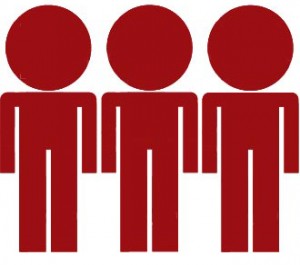 The Three Friends Brewing Company was founded by Stephen, Chris and Kristian who, having known each other for many years through playing in bands and drinking together, felt that an obvious hobby to share would be home brewing, and this quickly became an obsession.
At present they’re hoping to find a brewery to accomodate them as cuckoos and are still working their various day jobs in marketing and product development, but with one eye (or should that be three?) on brewing more regularly and getting their licences in order to start putting their beer into casks and kegs and getting them out into the wider world.
In closing our brief chat Kristian noted something that I’ve been constantly bowled over by, and that’s that, “a lot people in the industry, and connected to it, have been massively helpful and amiable. That’s been lovely and encouraging.”

So the big question then is can they make beer?
Well now… 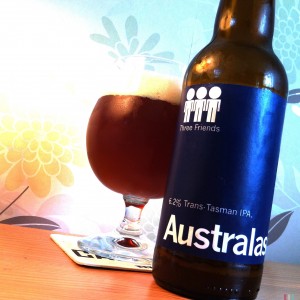 Australasia (6.2%)
Described as a Trans-Tasman IPA, Australasia has been brewed with Junga, NZ Cascade, Green Bullett, Super Alpha, Summer and Galaxy hops.
That’s a lot of hops.
The beer poured thick and foggy but with a welcoming bubbly head, and it’s sitting in front of me giving off a great big breathy kiss of tropical fruit chewy sweets, vanilla pods and honeydew melon.
There’s a sugarcane juice filled malt, caramel rich and stirred with a stick of celery, which is very nice, but it’s only really a bit part actor to the big hoppy stars.
The hopping is deep and loud and boisterous and full of fun.
Zippy citrus loudhailers shout, “Come and get it!” while flogging cheap kiddies sweets, all tropical fruit juice and rhubarb.
Mango flesh gives substance and there’s a fiery pepper going on too.
I was warned by the brewery that they hadn’t quite got the bottling right and you can see that in the thick soupy look of the beer, but I’m telling you straight, once they’ve tweeked this we’re looking at a serious contender for a new favourite beer. 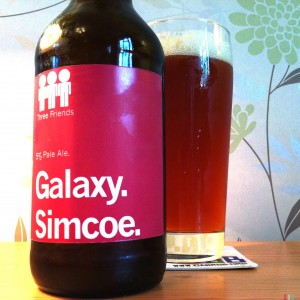 Galaxy. Simcoe. (5%)
Another very good beer from this young triumvirate of brewers.
Yeah, get me and my clever words.
This beer poured a little better than the last but is still a little on the cloudy side.
The smell is enormous bitter lemons and over ripe mangos.
In fact the hops are pretty fierce, burning with lime juice and lemon skins.
There’s a malt tucked away in here and it’s good and biscuity and, just as you breathe out, it goes all digestive rich and a bit more forceful.
It can’t combat the hoppy powerhouse though, wave after wave of sharp highs, chilli heat at times, and then BANG, a waterbomb filled with fruit sweet flavouring explodes in your face.
Sour jelly chews and a handful of cola bottles for good measure.
This is one of those beers that leaves you a puckered, pursed, hollowed out husk, but happy to have ended that way. 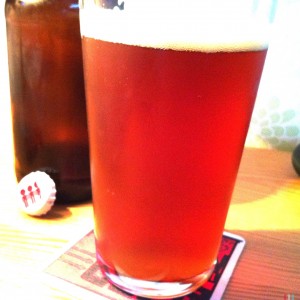 American Wheat (5.9%)
Initially I was told that this beer was an IPA made with leftovers, but subsequently I’ve been informed that it’s an American Wheat beer.
I’ve also been told that it includes, in varying proportions, NZ Cascade, Centennial and Citra hops along with Pale, Carapils, Wheat and Vienna malts.
Whatever it is I only hope that they wrote the recipe down as this is my favourite of the three bottles I was given to try.
The beer pours a lovely burnished amber with a nice creamy head and smells fruity and sweet and laced with jasmine and lavender.
There’s a really good malt body here, it’s a sweet caramel and heather honey smeared on an over baked wheat biscuit, rich and satisfying.
The hops blend into a blast of acidic citrus, full of orange rind and grapefruit juice, some kiwi fruit flesh and lime zest.
But there’s also a lovely perfume thing going on, slightly Parma Violety, full of Eastern promise and coated in a peppery crunch.
Ace.