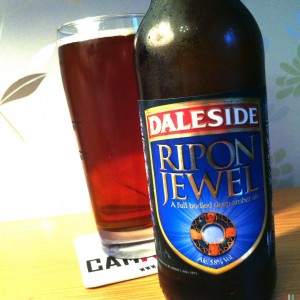 Daleside Brewery was established in the mid 1980’s and is based in Harrogate.
It’s a new brewery to me but if this beer is anything to go by I’m looking forward to trying more by them.
This evening I’ve had two hyper hoppy beers and so Ripon Jewel is a delightful change.
It’s an amber ale, shining and warm, with no real head but a lovely aroma of fruit shortcake biscuits.
This is a malty beer though not overly biscuity, with an enormous fruit presence.
You get rum and raisin, a hit of brandy, a hefty dose of apple juice and some cherry pie redness, slightly sour but very satisfying.
The reasonably high ABV is hidden very well under the weight of the malts and just provides a good warmth.
The hops aren’t massive but there’s enough grassy straw with a peppery lemon edge to stop the maltiness becoming sickly sweet.
The beer doesn’t have much of a dry finish however, instead it’s a coating of honey that’s very nice but might eventually become a little too much.
Very nice indeed.