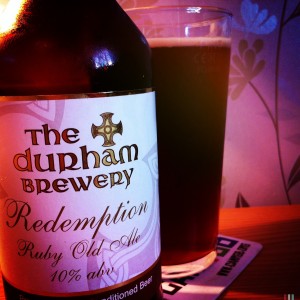 Redemption is a limited edition beer brewed in December 2011 and matured for ages.
I recently grabbed three bottles of this beer and after a chat with Ella at Durham I formulated a plan about how to drink them.
You see the brewery say that this beer is still quite young and will be really ready in another three or four months.
And so the plan is to try one now, one in three months time, and one in six months time in order to compare and contrast.
It seems like a good idea, but it’ll only work of course if I can keep my hands off it.
I’ll try.
I promise.
It’ll be difficult though because Redemption is a lovely beer.
It pours a deep rusty orange red with only the mildest trace of a head.
The aroma is sherry trifle like your Grandmother made, including the sponge base, and that image follows right through into your first mouthful.
Chest warming brandy carries rich biscuits, tinned summer fruits, coriander, pepper, jelly and hundreds and thousands.
There’s a smear of thick cut orange marmalade on a whisky laced crumpet, plum pudding and ice cream wafers.
And then you get finished off with a delightfully dry and green leafed hop that has hints of citrus but is mainly just clean and crisp and gorgeously long.
Can I wait for three months for my next glass?
I’ll try.