Many of you will have already read Zak Avery’s article on this beer.
If you’ve not then I suggest that you do so as, while commenting on this particular beer, Zak opens up a dialogue about Craft beer in general and British beer today.
I can see his argument and when it comes to this new brewery saying in their press release that they are making Czech Lager in the Czech Republic I wonder why they’ve chosen to do so.
After all, there’s shed loads of lager produced there already.
I’ll return to all this in a minute or two, but first what is Ted like? 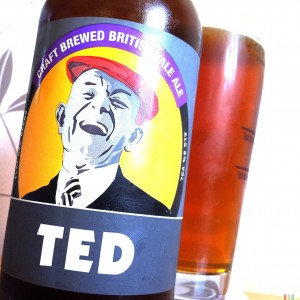 It’s a rather good Pale Ale as it goes, with an enormous toffee brittle and soft biscuit malt that by turns is sweet and burned bitter.
The aroma is peppered honey and there’s a decent pithy elderflower and wood sap hop that gives a very nice dry finish.
So, where was I?
Ah yes, unlike Zak I quite like the labelling though I can’t exactly work out what they’re going for.
One thing’s for sure Flat Cap have got people talking about them, and in so doing they’ve raised the difficult position of the term “Craft” by sticking it right on the front of their beers.
What I am conscious of is that in the same way that in the early nineties major record labels bastardised the term “Indie”, hijacking it and moving it far away from its original (and originally powerful) meaning in an effort to sell mediocre guitar bands to the masses, the beer world is in danger of, if it’s not done so already, over-using “Craft”.
If the term ends up as a marketers shortcut for good and cool (a lá Greene King’s rebranding of their beer as “Handcrafted”) it’ll mean nothing at all.
Like CAMRA’s “CAMRA Say This Is Real Ale” label that, by its very nature, insinuates “This Beer Is Very Good”, sticking the C word on your label becomes little more than a ploy to draw punters in.
Is that wrong?
I guess not, but if it goes the way of “Indie” it’ll stop the word having anything to do with any real measure of how a beer has been made and will simply be about how a beer is being sold.
In terms of Ted and Flat Cap the use of “Craft” is marketing a decent beer but I sense the floodgates creaking under the strain of more and more breweries being tempted by the possibility of adding sales volume through the addition of five little letters.
You only need to look at Tandleman’s excellent article the other day to see that many bigger brewers are already looking at the possibilities of brewing in a, shall we say, more “artisanal” manner than they’ve been doing previously.
Is this a move towards making a more interesting range of beer or are they all just being a bit Crafty?