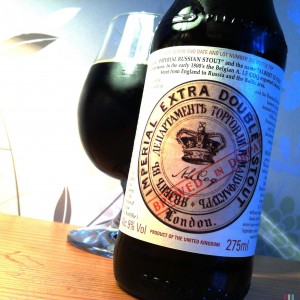 Pouring an impenetrable black with only the merest suggestion of a head, this bottle conditioned imperial stout reeks of port and sherry and fruit compote.
It’s quite difficult to break the flavours down in this, it’s almost so complex as to become one big single flavour all of its own.
Or perhaps I’m being lazy.
Let’s have a go.
There’s treacle, thick as tar and black as pitch treacle, beefy yeast ripeness, massive fruit punch and booze that takes your breath away.
Definitely not a beer for the feint hearted, the sherry and port aromas continue into the flavour.
I’ve been looking around the label for notice pf this beer being aged in wood but can’t see anything, but the fact is that there’s a damp oak and rum flavour that one would often associate with a beer aged in that way.
There could well be some hops in here too, but they have no individual presence as such, instad they just add a good bitterness to the overall boozy black sexiness of this brilliant little bottle of beer.