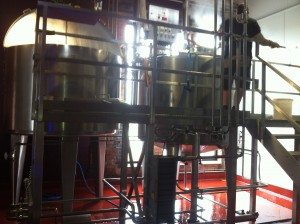 We decided to have a day out recently and made the short trip on the train to Ludlow.
Being a Beer Geek I was naturally excited when I saw, next to the train station, a building with the name of a brewery on it. Having had a few beers in local pubs in Shropshire I ensured we made time to pop in for a look and possibly sample a beer or two.
Daytime drinking doesn’t normally agree with me I am sorry to say fellow beer fans.
After a lovely afternoon and a good lunch we made our way back.
The building is unsurprisingly a converted railway shed.
As you walk in you can see huge brewing vessels in the corner next to a welcoming bar.
It reminded me of the micro brewers I had the pleasure of visiting on my trips to Seattle. 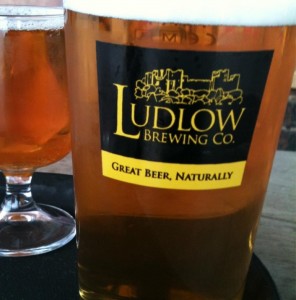 We had a quick look around and were pleased to find they were child friendly, ordered a couple of drinks and sat outside. I made a point obviously of buying a few beers from the brewery shop to sample at a later date as I mentioned I’m no daytime drinker.

This being a beer blog I suppose I should tell you some beer.

I had a pint of Boiling Well (4.7%) earlier in the day with lunch. This is named after the local Boiling Well Meadow near to the brewery. It is a copper coloured ale with a full body and a fruity biscuit taste. It is drinkable but nothing too exciting.

Next was Stairway (5%) which was much more enjoyable. This is a much paler ale with a lovely golden complexion. I am told it is made using Sladek lagering hops which would explain this, however much more than that it has a refreshing floral citrus taste to it so much more of a pale ale than a lager. As it was quite a typical muggy Summer afternoon the beer was ideal for that.  Very pleasing and I could easily have sunk a few more but the train home may have been difficult. I bought a bottle to sample at home and it was equally as enjoyable.

Ludlow Gold (4.2%) was the first beer produced and I have seen it quite a lot around the fine pubs of Shropshire. It is a very popular choice for many drinkers and it’s self evident why. Another lovely golden complexion reminding you of a Shropshire sunrise. The taste is of summer walks in fields of which there are many around here. Wonderful lemon and pineapple flavours are apparent here. Dare I say a session beer but only in the respect you could drink quite a few of these without being bored by this delicate and rather excellent beer. 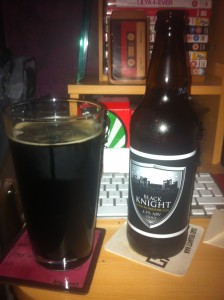 Black Knight (4.5%) is a stout as it’s name may suggest and is rather wonderful. After years of drinking the well known one I was often disappointed when trying new ones and often found them bland watery affairs. This certainly isn’t! This is bottled conditioned (as are the whole range) and so a careful pour gave a slight frothy head. What you get is a warm, nutty taste flavoured with liquorice and chocolate. An excellent beer and not as is often the case with some stouts, a task to actually finish.

If you are passing you should give Ludlow Brewing Co. a visit and sample some rather lovely local beers with very friendly folk happy to assist you and give you a tour.